Kailyn Lowry: I’m Getting My Tubes Tied (If I Don’t Get Pregnant Again First)! 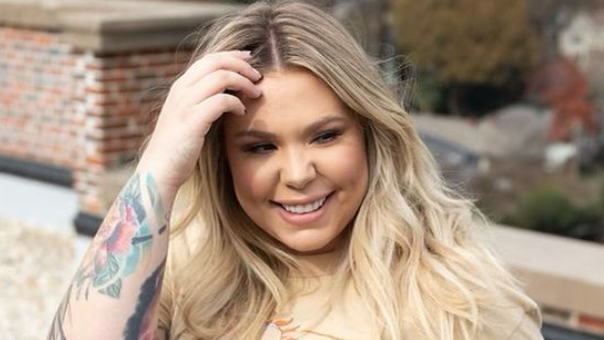 
Kailyn Lowry is good at many things.

Getting pregnant, creating chaos out of thin air, she’s got that sort of stuff covered.

But while she does excel at some things, one area that she’s just not great at is critical thinking.

This girl has four children by three different fathers, she’s 30 years old with a successful career and a good education, but she sure manages to do a lot of dumb stuff anyway.

Take, for example, her current relationship.

Kailyn is dating a 23-year-old guy named Elijah, who she disgusting refers to as “Baby Lijie.”

He did live next door to her and her children, but she moved him in with them after a few minutes of dating.

There are approximately a billion red flags here, but despite all of them, Kail has called Elijah the love of her life.

A lot of people are concerned that she’s going to pop up with a pregnancy announcement any day now, because that’s just how she does things.

But according to some things she said on a recent podcast, that may never happen again!

On the podcast, as transcribed by The Ashley’s Reality Roundup, Kailyn admitted that she was considering getting her tubes tied …

But she also said that if she happened to get pregnant before she got the surgery, then she’d go ahead and have an extra baby.

“I guess whatever happens first,” she said, like she has no idea how she could possibly prevent a pregnancy.

“I think the more time that goes on, the more I just don’t want more children because I feel like I’m spreading myself so thin, and all my kids are such different ages that they all need me for different parts of their lives right now,” she explained.

She added that she’d like to get her tubes tied sometime this year, and that she’s going to speak with her doctor soon about having the surgery.

The problem, she said, is that she’s been so depressed for the past few months, and it’s been really affecting her perspective on life.

“This depression has truly humbled me and has really taught me that I need to put myself first sometimes,” she said, “and I can’t stay busy 100% of the time.”

“I think once my life slowed down, and I left the show … my life slowed down so much so I was forced to kind of deal with the things that I hadn’t been dealing with, so I just don’t think that now is a good time in my life to have more children.”

“I really just want to be there for the ones that I have,” she added, which may be the wisest thing she’s ever said.

While she’s struggled with her mental health in the past, she “didn’t struggle this much to get out of bed and do things with my kids.”

“Depression has made it harder,” Kailyn complained. “I want to want to do things with my kids. I always have. That’s always the mother that I’ve been … it’s like a fight to do everyday things.”

But to everything there is a season, and she made it clear that pregnancy season could be coming up soon, too.

“Maybe once I get through this depression, it will be a little different,” she theorized.

“So don’t hold me to that if I end up pregnant next year and you guys are like ‘I thought you weren’t having any more kids,’ and it’s like, ‘Well I said that during depression!’”

She stressed that “Nothing is absolute but right now I would say, no, I’m not going to try for a girl, but maybe next year that could change.”

This is all just painfully goofy, isn’t it?

Like, has she seriously learned nothing in all these years?!

She complained about sharing custody when she was married to Javi and just had to figure out how to coparent with Jo.

Now she’s got three different men to deal with and she’s not in a relationship with any of them.

How could she possibly be this flippant about adding another child into this mix?

Especially because that child’s father would be a man she’s only been with for a few months at most.

Then why not be a little more proactive about preventing another pregnancy?

She’s jumping straight to something as serious as a tubal ligation instead of just taking regular birth control, but saying that she might get pregnant before she has the procedure.

Sincerely, what is the point of any of this?!

Everything You Need To Know About The Bombshell Commission Lawsuits