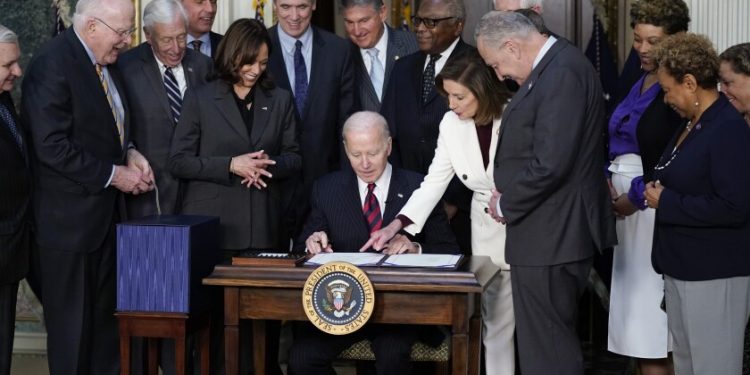 It is not clear precisely when the second gentleman was tested. Sabrina Singh, a spokesperson for Harris, said in a statement at 3 p.m. Pacific time that Emhoff had tested positive “earlier” in the day. Another White House official later specified that the positive test came in the afternoon.

The vice president tested negative but will continue to test and skipped a White House event on gender equity Tuesday evening “out of an abundance of caution,” Singh said.

The positive test set off concern given the possibility of spreading the virus among top officials throughout the government. Most such officials and White House staff are fully vaccinated, however, limiting the potential of severe infection.

“This virus is still widely circulating in the U.S., and some people will get markedly sick from it, but it’s certainly less than would have occurred without a vaccination program,” said Dr. Jeffrey Koplan, a former director of the Centers for Disease Control and Prevention who teaches at Emory University in Atlanta.

A White House official who would comment only on the condition of anonymity said Emhoff did not experience any symptoms in the morning but began feeling “mild” symptoms in the afternoon. His first test, an antigen test, was negative. But a second PCR test came out positive, prompting the public announcement and the change in Harris’ schedule, according to the official.

A different White House official said Harris was last with the second gentleman on Tuesday morning. She attended two subsequent meetings with President Biden — a morning intelligence briefing and an early afternoon bill-signing, according to her schedule.

Biden, 79, is fully vaccinated, but older people face greater risk of serious illness from the disease.

The White House recently relaxed masking requirements, and Harris was seen in a close huddle with Biden and congressional leaders as the president signed the $1.5-trillion spending bill Tuesday afternoon. None of the officials was wearing a mask.

Among the officials were House Speaker Nancy Pelosi, the San Francisco Democrat, and Sen. Patrick J. Leahy, a Vermont Democrat who serves as president pro tempore of the Senate. They are the second and third in the line of presidential succession after Harris. Senate Majority Leader Charles E. Schumer, a New York Democrat, was also in attendance for the signing.

A White House official said Biden was last tested over the weekend and will continue his regular testing schedule. CDC guidance does not count Biden as a close contact of Emhoff since they were not directly together.

Spokespeople for Pelosi, Leahy and Schumer did not immediately return emailed questions about whether they would take additional tests or safety measures.

“I’d say it’s a tough call” as to whether more testing is needed, given the efficacy of vaccines and the exposure levels, Koplan said. “If you’re part of the medical team there [at the White House]you know what risk they’re looking at.”

Fashioning Masculinities at the V&A Review: A marvellous celebration of gender fluidity

Fashioning Masculinities at the V&A Review: A marvellous celebration of gender fluidity