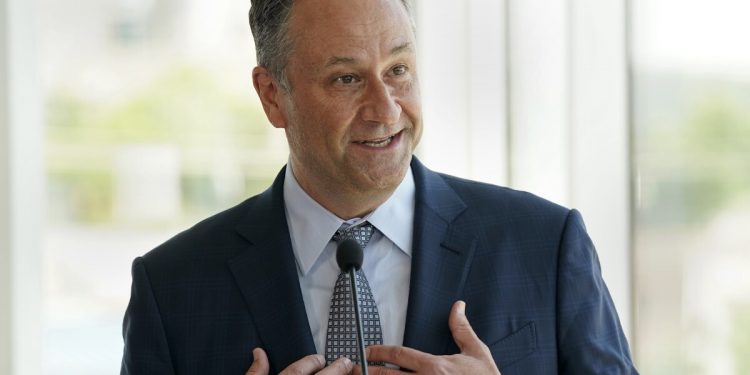 
Doug Emhoff, Vice President Kamala Harris’ husband, said Friday that Democrats have a clear message about their accomplishments to contrast with Republican obstructionism for this year’s midterm elections.

“We know what we’re for. We’re for doing the work for the American people,” the second gentleman said at a fundraiser in Brentwood on Los Angeles’ Westside, listing the administration’s work on areas such as the pandemic, job creation and infrastructure. “We’re serious people doing the serious work of government.

“We are going to be able to make our case to the American people as we go into the midterms,” he said before turning his attention to the Republican Party and asking, “What are they for other than a power grab and basically trying to cheat to get there?”

It’s an optimistic message in an election cycle where Democrats are widely expected to lose control of the House of Representatives — both because the party in power in the White House typically loses seats in the first midterm election of a presidency, and also because of President Biden’s poor approval ratings.

Republicans also have an edge in fundraising, with the party’s national committees and congressional leadership super PACs raising $275.9 million in 2021 compared with Democrats’ $241.1 million, according to the Center for Responsive Politics, a nonprofit that tracks money in politics.

Supporters of Harris — the first woman as well as the first Black or Asian American to hold the office — argue that the criticism is driven by sexism and racism, but others say some of it is self-created.

Though Emhoff did not directly address the criticism of his wife, he acknowledged that the administration could do a better job of promoting its successes, such as the aid provided by the American Rescue Fund, the more than 200 million people who have been fully vaccinated, or the projects that will be funded by the $1-trillion infrastructure package Biden signed in November.

Emhoff made the remarks while speaking to about a dozen donors at a fundraiser for the Democratic National Committee.

The morning gathering took place in the backyard of a Brentwood estate owned by Andrew Howard, a partner at Shamrock Capital, and his wife, Jennifer.

The DNC did not release details about ticket prices or whether the event would benefit certain candidates. Attendees drank bottled water; platters of mini-muffins sat nearby.

Emhoff is scheduled to head back to Washington on Saturday, the day before his favored Los Angeles Rams take the field at the Super Bowl at SoFi Stadium in Inglewood.

The best Valentine’s Day lingerie, according to OnlyFans stars

The best Valentine's Day lingerie, according to OnlyFans stars