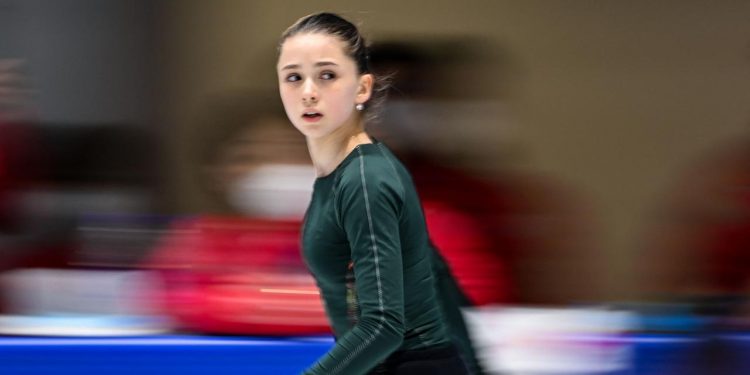 
The sporting world has responded with unanimous disdain for the shock decision to clear Russian teen freak Kamila Valieva at the 2022 Winter Olympics.

The 15-year-old figure skater will return to competition on Tuesday in the women’s individual short program despite allegedly testing positive for a banned substance before the Beijing Games began.

She was given a lifeline that has outraged the sporting world after a hastily convened Court of Arbitration for Sport session on Sunday.

The scandal will descend into a complete farce when the women’s singles skating event concludes on Thursday with the executive board of the International Olympic Committee (IOC) announcing the medal ceremony for the event will not be held should Valieva finish in the medal standings.

It comes after the medal ceremony for the team event was cancelled, with the IOC blaming a “legal” issue. It was then announced Valieva had allegedly returned a positive test result for banned substance trimetazidine, a heart medication. The Russian team has claimed it was only notified of Valieva’s positive test result the day after the ROC team won the gold medal in the team event — six weeks after she returned the test result. A separate investigation reportedly remains open into whether the ROC team will be able to keep the gold medal.

The Russian Olympic Committee stood alone as the only Olympic nation to praise the CAS decision.

“We do not know how many tears and what moral strength this whole crazy situation has cost Kamila,” the Russian Olympic Committee said, according to Reuters.

“To go out and train every day with a decision hanging over you, not knowing what will happen tomorrow – to force yourself to appear calm in public, allowing your feelings to show only when no one is watching, we don’t know. It’s very personal. But what we know for sure and what we can definitely do is cheer for her tomorrow, then on Thursday with all the strength of our energy.”

The New York Post reports Oleg Matytsin, the Russian sports minister, added that the CAS arbitrators involved in the appeal “showed integrity, professionalism and carefully considered all the circumstances of the case.”

The rest of the sporting world has branded the verdict “a slap in the face” to clean sport.

“Russia has hijacked the competition and stolen the moment from clean athletes and the public,” he said.

“In addition to athletes and the public, this young athlete has been terribly let down by the Russians and the global anti-doping system that unfairly cast her into this chaos.”

“Athlete who violates doping cannot compete in the game,” she wrote on her Instagram stories.

“This principle must be observed without exception. All players’ efforts and dreams are equally precious.”

USA Today columnist Christine Brennan wrote on Monday the decision “is just a slap in the face to all of those athletes doing it the right way”.

US sprinter Sha’Carri Richardson responded to Brennan’s comment on social media by suggesting her own doping case was treated unfairly in comparison with the Valieva case.

The gold medal-hopeful was barred from competing at the Tokyo Olympics after testing positive for marijuana during the US track and field trials.

“The only difference I see is I’m a black young lady,” she said.

Richardson admitted using marijuana after her positive test last year, saying she took the drug after learning of her mother’s death.

“Failed in December and the world just now know however my resulted was posted within a week and my name & talent was slaughtered to the people,” Richardson wrote.

United States Olympic & Paralympic CEO Sarah Hirshland said in a statement that the committee is “disappointed” in the Valieva decision, and called out the Russians for what appears to be a repeat offence.

“Athletes have the right to know they are competing on a level playing field. Unfortunately, today that is being denied. This appears to be another chapter in the systematic and pervasive disregard for clean sport by Russia,” Hirshland said.

“At the end of the day, there was a positive test and there is no question in my mind that she should not be allowed to compete. Regardless of age or timing of the test/results. I believe this will leave a permanent scar on our sport.”

According to the explanation given by the CAS, the protest lodged against Valieva returning to competition was rejected because of a technicality surrounding her age.

The ruling stated that “on the basis of the very limited facts of this case, and after consideration of the relevant legal issues, it has been determined that no provisional suspension should be imposed on the Athlete,” the ruling read.

The reasons given were that Valieva is a “Protected Person” under the World Anti-Doping Code (WADC) – meaning “an athlete who at the time of the anti-doping rule violation has not reached the age of 16” and who can’t be officially identified by sporting or doping authorities if found guilty of a violation.

Russia is already under sanctions for a massive state-sponsored doping program that reached its peak at the 2014 Sochi Winter Olympics.

As a result, Russians are competing in Beijing under the flag of the Russian Olympic Committee (ROC).

The Russian flag cannot be displayed at the Games or on the team’s clothing and the national anthem cannot be played.

Asana Stock: Has A Huge Runway Ahead (NYSE:ASAN)

Asana Stock: Has A Huge Runway Ahead (NYSE:ASAN)