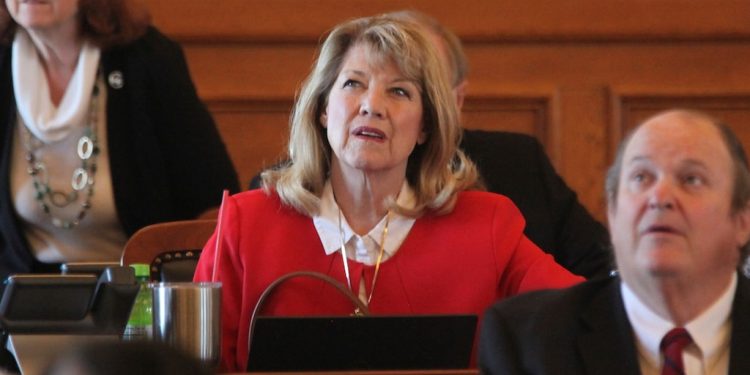 Brenan Riffel wasn’t expecting a response when she emailed Kansas politicians about a proposal that would make performing gender-reassignment surgeries on minors a crime.

“What have trans kids ever done to you? Are they a threat to you? Should they be attacked for simply wanting to be who they want to be?” Riffel, a transgender woman and University of Kansas graduate student, wrote to the bill’s four co-sponsors last week.

But two days later, state Rep. Cheryl Helmer (R) replied. The former school counselor told Riffel that, as a former biology major, she understands the “difference biologically between a male and a woman.”

No surgeon, Helmer added, “can cut, remove, wop, add to change the biology.”

“Now, personally I do not appreciate the huge transgender female who is now in our restrooms in the Capitol,” Helmer said in the email to Riffel, which was reviewed by The Washington Post. “It is quite uncomforting. I have asked the men if they would like a woman in their restroom and they freaked out.”

Riffel, 25, called the response disrespectful and blatantly transphobic. Byers, who told The Post she learned about Helmer’s comments from a reporter, said the remarks were awful.

“I am [perhaps] the most prominent trans figure in the state of Kansas right now, but they are directed at the entire transgender community — especially trans women,” Byers said of Helmer’s remarks.

Helmer did not immediately respond to messages from The Post late Tuesday. In an interview with the Topeka Capital-Journalshe confirmed she was referencing Byers in her email about sharing the Capitol restroom. Helmer also took to Facebookwhere on Tuesday she doubled down on unfounded claims in her email about children being attacked by transgender students in school locker rooms and restrooms.

“[O]ur wee little girls in elementary and middle and high school are having to be exposed and many have been raped, sodomized and beaten in the restrooms by these supposedly transgenders who may or may not be for real,” Helmer wrote in the email to Riffel.

The email exchange occurred as states across the country are debating — and, in some cases, passing — a wave of anti-transgender bills. In Kansas, lawmakers are attempting to overturn Democratic Gov. Laura Kelly’s veto of a bill banning transgender athletes from playing on girls’ sports teams.

Transgender girls are at the center of America’s culture wars, yet again

Helmer, in her email to Riffel, wrote that transgender women “are much larger, stronger [with] more adrenaline and testosterone” making it “possibly more dangerous and we have to share our restrooms.”

“This is an outward lie described and tried to be pushed that somehow I’m some sort of predator,” Byers said, adding: “Other people’s children are near and dear to me and their protection is number one in my heart. It’s incredibly frustrating to have someone even imply that is who I am because that’s nowhere near I have ever been in my life or will ever be.”

Riffel, who came out to family and friends in November, said Helmer owes Byers and the transgender community an apology. Byers told The Post that Helmer has not apologized, and she doesn’t expect she will.

On Monday, Kansas House Minority Leader Tom Sawyer (D) condemned Helmer’s comments, saying they were an “abuse of her office.”