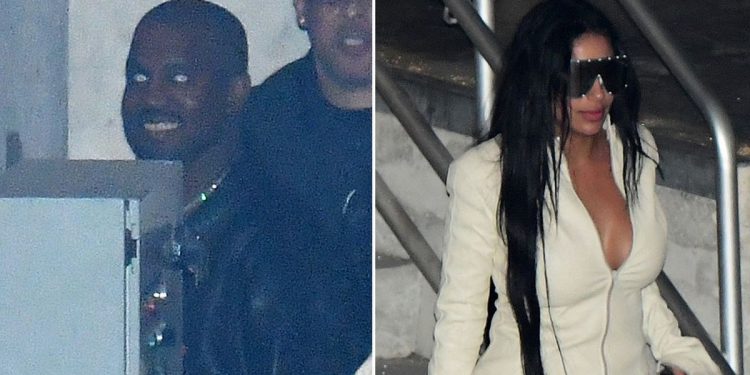 
Kim Kardashian lookalike Chaney Jones accompanied Kanye West as he exited the LoanDepot Park in Miami, Florida after he performed his Donda 2 show

Kanye West, 44, was spotted with Kim Kardashian lookalike Chaney Jones, 24, as he left his album listening party at the LoanDepot Park, Miami, Florida on Tuesday.

Hitmaker Kanye – who now goes by Ye – had a wide-eyed appearance as he strolled out of the venue with the Instagram model and his security team.

Chaney clearly took inspiration from Kanye’s estranged wife’s fashion choices as she stepped out in a skintight catsuit and shield sunglasses, similar to the one that the mother of the rapper’s children wore to his Donda show at Atlanta’s Mercedes Benz Stadium in 2021.

The only difference between the two women’s ensembles were the colours with Chaney opting for a beige look in contrast to Kim’s bold red outfit.

The Instagram model appears to style her appearance on Kim Kardashian
(

The sighting of Kanye and Chaney came after he had an on-stage tantrum during the second half of his Donda 2 listening event.

The Stronger rapper threw his microphone to the ground as sound problems interfered with his performance of the song jail, TMZ report.

Kanye is said to have thrown the equipment down after being wound up when he noticed sound issues which led to him launching the mic.

Kim and Kanye are estranged
(

As he belted out his track security, he seemed to suggest nothing would stand in the way of reuniting with his family.

“Never take the family picture off the fridge. Never stand between a man and his kids. Y’all ain’t got enough security for this,” Kanye continued.

“I married the best rapper of all time. Not only that, he is the richest Black man in America. A talented, legit genius who gave me four incredible kids,” Kim can be heard saying at the beginning of the song Sci-Fi.

The snippet was taken from Kim’s opening monologue from her performance on SNL in October.