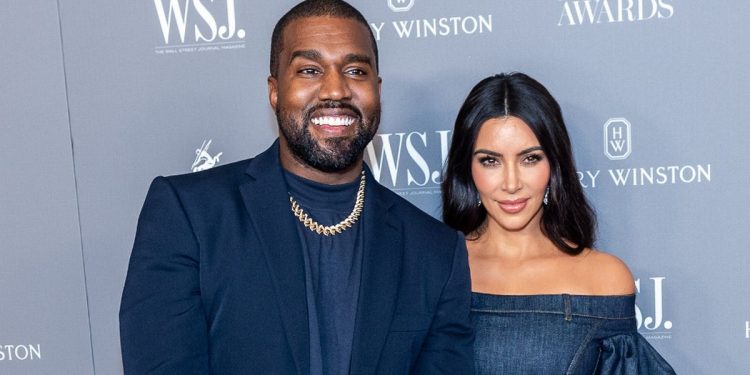 Kim Kardashian and Kanye West: A look back at their relationship

Kanye West has blasted ‘picking sides against the dad’ as his divorce with estranged wife Kim Kardashian turns sour.

The 44-year-old rapper took to Instagram on Friday to slam the Keeping Up With The Kardashians star for ‘kidnapping’ their daughter Chicago as their feud rages on.

In a fresh attack at his estranged wife of six-years, Kanye – who shares four children with Kim – accused people of ‘picking sides against the dad’ when it comes to divorce settlements.

On Friday night, Kanye posted a screenshot of a tweet with the: “Kanye West Shades Kim Kardashian Over North West on TikTok.”

A Twitter account called @NewYeHeadlines retweeted it, writing: “Corrected: Kanye West wants a say on how his children are raised.”

On Instagram, Kanye wrote in part “MY CHILDREN ARE NOT A GAME TO ME,” accusing media outlets of trying “TO SPIN THE NARRATIVE”

He added that they were “PICKING SIDES AGAINST THE DAD”.

The scathing post came just hours after Kanye blasted Kim for her parenting choices as he furiously slammed her decision to allow daughter North, 8, post on TikTok.

Kanye took to Instagram to lash out at Kim after she accused him of trying to ‘ manipulate and control’ their divorce.

Kanye says daughter North is on TikTok ‘against his will’
(

In particular, Kanye took issue with Kim referring to herself as the ‘main provider’ of their four children, going on to accuse her of not providing the correct address for their daughter’s fourth birthday party.

He went on to suggest that Kim had accused him of stealing and that he was forced to take a drugs test before entering the property.

Sharing a screengrab of Kim’s Insta Story, he wrote: “What do you mean by main provider ? America saw you try to kid nap my daughter on her birthday by not providing the address.

Kanye wants to stop his daughter from posting on TikTok
(

It comes after Kanye claimed their daughter was on TikTok ‘against his will ‘.

In response, Kim slammed the rapper for trying to ‘control and manipulate’ their divorce.

She went on to say that she is ‘doing [her] best to protect [their] daughter’ North, eight, and that being on the platform ‘brings her happiness.

Kim suggested that Kanye’s ‘constant attacks’ on her are ‘more painful’ and is ‘publicly only causing further pain for all’.

In a lengthy statement on her Insta Stories, she wrote: “Kanye’s constant need for attacking me in interviews and on social media is actually more hurtful than any TikTok North might create.

Kim has slammed Kanye for trying to ‘control and manipulate’ divorce
(

“As the parent who is the main provider and caregiver for our children, I am doing my best to protect our daughter while also allowing her to express her creativity in the medium that she wishes with adult supervision – because it brings her happiness.”

“Divorce is difficult enough on our children and Kanye’s obsession with trying to control and manipulate our situation so negatively and publicly is only causing further pain for all.

“From the beginning I have wanted nothing but a healthy and supportive co-parenting relationship because it is what is best for our children and it saddens me that Kanye continues to make it impossible every step of the way.

“I wish to handle all matters regarding our children privately and hopefully he can respond to the third attorney he has had in the last year to resolve any issues amicably.”

Kanye’s estranged wife Kim, 41, filed for divorce from the rapper last year after six-years of marriage.