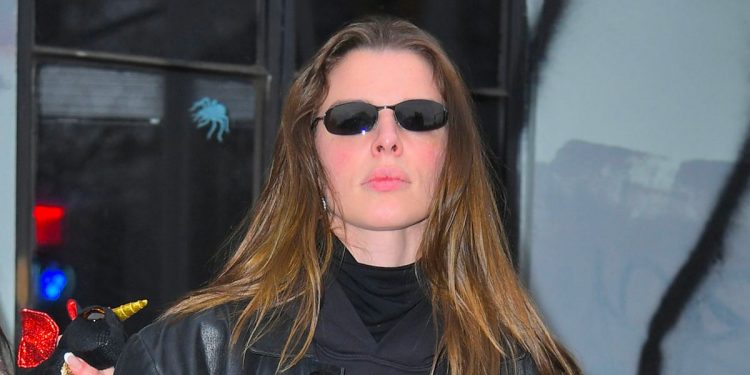 The Uncut Gems star, 31, who recently boasted that new beau Kanye, 44, gifted her with a rail of clothes on one of their dates, was seen celebrating her son Valentino’s birthday in Manhattan’s East Village.

Ticking all the boxes for the cool mum vibe, she wore black leather trousers, a black hoodie and then a long leather coat that brushed her ankles.

She accessorised with dark sunglasses glasses and added a pair of leather gloves – all similar to the garb worn in the Matrix films.

The actress’ outfit was the spitting image of an outfit Kim pulled together last month.

The Skims shapewear founder has been likened to Neo in the past, having worn Matrix-inspired outfits from as far back as 2019.

Julia was seen with Valentino and pals at Lucien restaurant in the trendy part of town.

Her ex-husband, Peter Artemiev, was seen at the event and the former lovers posed together as they held their son.

She captioned a story of the two of them with “We made this baby!”

Peter, who works as a pilot, wore a college green shirt, black jeans and loafers with gold tips.

The pair held a strong united front after Julia called him a “deadbeat” and an “alcoholic” in December.

Kanye has been styling Julia for a while, but the pair are now an item
(

Last year, Julia posted a photo of her ex who she was married to from 2018 to 2021, with the caption: “Have you seen this deadbeat dad?”

She publicly apologised on her podcast Forbidden Fruits and said: “All I want to say is, I’m sorry.”

She also explained she’d had a difficult Christmas, adding: “Everyone had Covid. I had no help at all whatsoever, and my friend was out and saw Peter out and Peter was saying something along the lines of, “That b**** won’t let me see my son.” And when that was relayed to me… my blood boiled. I just snapped.”

She got her son Valentino an Alice and Wonderland inspired cake
(

Julia publicly apologised for hitting out at her ex husband
(

Previously speaking about Peter, Julia said: “I just don’t want my son f***ed up cuz he feels like his dad was absent or loved alcohol and partying more than him … this man left me with a 5 month old and a dog and a home and ALL THE BILLS. It’s wrong!!! It’s not fair!!!”

Kanye West declares that he won’t be ‘gaslit’ and ‘stopped from seeing his kids’
Tags: FoxGirlfriendIconicJuliaKanyeKardashiansKimMatrixrecreatesWests
Previous Post