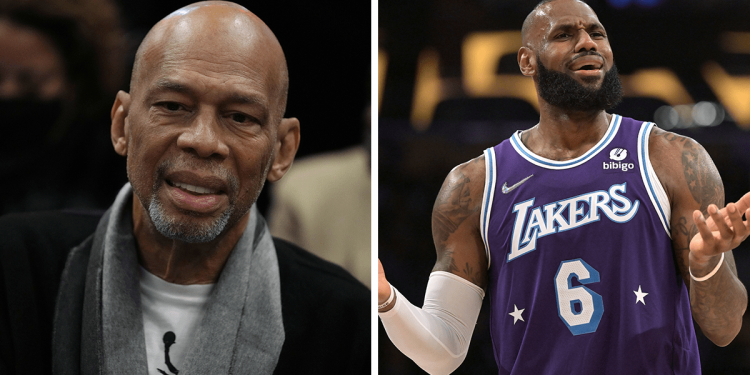 Two days after Kareem Abdul-Jabbar pointed out Lebron James has done things that are “beneath him” and that he should “embarrassed” about, the six-time NBA champion issued an apology and further clarified his comments about the Lakers’ star.

Jabbar made his initial comments about James in the Lakers’ game against the Nuggets on Sunday, one in which he was in attendance to present Carmelo Anthony with the NBA’s inaugural Social Justice Champion Award. The six-time MVP spoke on SiriusXM NBA Radio on Monday, stating that sometimes he can get things wrong.

“I’ve been talking to the press since high school, that’s 60 years of making statements,” Abdul-Jabbar said, via ESPN. “And I haven’t always gotten it right. And Sunday was one of those nights.

“It wasn’t my intention to criticize LeBron [James] in any way. He has done so much for the Black community as well as for the game of basketball. We may not always agree, but I want to wholeheartedly apologize to LeBron and make it clear to him that I have tremendous respect for him. And if he can accept that, I’ll be very happy.”

Mannix: Kareem Abdul-Jabbar Says LeBron Has Done Things ‘He Should Be Embarrassed About’

Prior to the apology on Monday, Jabbar sent an email to the Los Angeles Times on Sunday sharing his thoughts on James as an activist and why he was so critical of James.

“LeBron [James] is still the daunting hero I described two years ago,” Abdul-Jabbar wrote. “He’s still a major force in improving lives in the Black Community. He’s still one of the greatest basketball players in history. He’s still a man who has earned the overwhelming admiration of millions. And every day he goes out and proves why he deserves that admiration.

“On occasion I have chided LeBron when I thought he was dropping the ball when it came to supporting the community. But I did so in the spirit of a loving older brother offering guidance, whether wanted or not. So, when I said that he has done some things he should be embarrassed about, that wasn’t a slam or a barb or even a finger wag, it was me recapping some of what I’d said in the past.”

The Lakers (31–47) currently sit 11th in the Western Conference and two games behind the Spurs for the 10th and final spot for the league’s play-in tournament. San Antonio (33–45) owns the tiebreaker against the Lakers.

James, who did not play in Sunday’s game due to soreness in his left ankle, will also miss Tuesday’s game against the Suns with continued soreness. If Los Angeles loses on Tuesday, James could be in jeopardy missing the playoffs for just the fourth time of his career.

For more Los Angeles Lakers coverage, go to All Lakers.