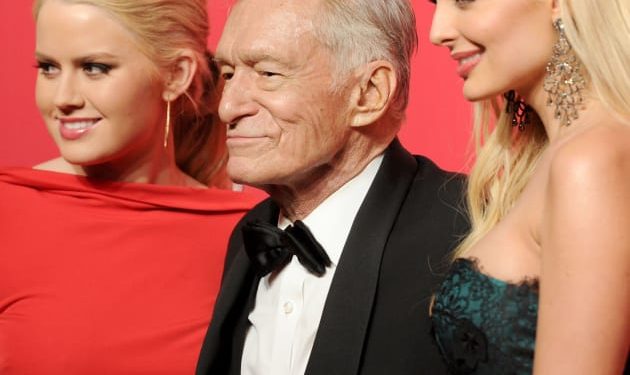 Karissa Shannon is the latest Playmate to come forward with some harrowing accusations against Hugh Hefner.


On Monday, the former centerfold sat down for a one-hour special on A&E, doing so in the wake of this same network airing “Secrets of Playboy,” a documentary that featured many other ex-girlfriends of Hefner speaking out against the late magazine founder.


Holly Madison, for example, detailed the toxic, gaslighting culture that surrounded Hefner and his famous mansion.


Others, meanwhile, delved into the sexual relationships they were basically forced into at the hands of Hefner.


In the case of Karissa and her twin, Kristina, they spoke on air to Lisa Guerrero and said that Hefner asked them to be his girlfriends when they were 18 years old, a short time after they did a test shoot for Playboy.


About six months later — after Holly Madison, Kendra Wilkinson and Bridget Marquardt started to get phased out as lovers by Hefner — the sisters say they “realized what we got ourselves into.”


On their 19th birthday, the Shannons said they were invited up to Hefner’s bedroom after smoking marijuana.


Once there, they said he offered them a couple of pills, which they took and which made them feel “f—ed up” and “wasted.”


“I just remember me being on one side of him, Karissa being on the other side of him. He was pulling our heads down, like a very hard pull, down to his penis so that we would give him oral sex,” said Kristina.


“And that was our 19th birthday. You’re never going to forget that.”


“It’s gross. It’s like having sex with your grandpa.”


After this initial encounter?


“I didn’t feel like my body was mine anymore. I felt used, disgusted,” said Kristina, while Karissa added:


“Both of us said he’s going straight to hell. He’s the devil, this is insane, we were disgusted with ourselves.”


Why did they continue on with any kind of relationship in this case?


Because, Karissa explained, they were afraid Hefner “would revoke our centerfold” deal if they did not — and they needed the money to support their grandmother.


The Shannons went deep in this disturbing interview.


They said Hefner never used protection. They said the women carried around warm washclothes to wipe the businessman down after intercourse. They said basically every woman in the mansion for chlamydia.


Like almost all other Playmates interviewed by A&E, they compared life within the mansion walls to a cult.


“He locked us in our bedroom. There would be a security guard sitting outside of our door,” the sisters said said.


“I was a shell of a person,” said Karissa. “It’s like being in prison and someone breaking you in solitary confinement. You’re just broken.”


She added of why they stuck around in this arrangement:


“We thought he would send us back, he would take everything away we had got, take away the allowance and not take care of our grandmother.


“We ended up doing it two more times and then just said we couldn’t do it anymore, and that’s how, later on, I ended up getting pregnant.”


“I think it’s a way for him to control me even more, having me on a leash.


The Shannons then outlined the complex way in which rapper Juicy J actually picked them up at a mall after Hefner’s security detail dropped them off… took Karissa to get an abortion… and then brought them back to the mall, where the Shannons purchased lingerie to make it appear as if they had just been shopping all along.


“Every time I’ve done it with him, it’s assault,” said Karissa of sex witth Hefner.


Karissa doesn’t really have any regrets, either.


She would “100%” terminate the pregnancy again, Shannon said on A&E, continuing:


“He would use control mechanisms completely throughout everything, so I’m happy that I had the abortion.”


Eventually, the Shannons convinced Hefner to let them live across the street (for a lower allowance) prior to extricating themselves from the situation entirely.


“We were diagnosed with PTSD and the psychiatrist said we’d have to go through a lot of therapy to unwind our brain,” said Karissa, while Kristina said the two are “still dealing with it” all these years later.


They added they haven’t seriously dated anyone since, with Karissa stating:


On the original series, A&E advises viewers that “the vast majority of allegations have not been the subject of criminal investigations or charges, and they do not constitute proof of guilt.”


In the wake of the docuseries, Playboy told E! News that the company today “is not Hugh Hefner’s Playboy,” adding:


“We trust and validate these women and their stories and we strongly support those individuals who have come forward to share their experiences.


“As a brand with sex positivity at its core, we believe safety, security, and accountability are paramount.


“The most important thing we can do right now is actively listen and learn from their experiences.”