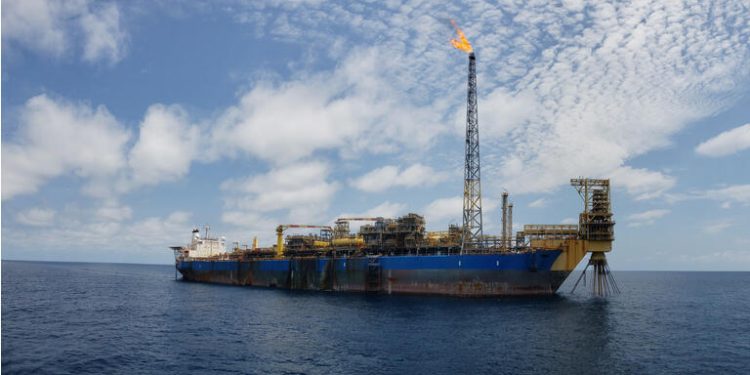 
As the crude oil prices continue to swing higher, the buzzword in the market quietly changes, reflecting a shifting supply-demand dynamic. Market participants first are fixated on a depleting oil inventory; they next worry about a dwindling spare production capacity; they then become obsessed with insufficient oil reserves in the ground. Intelligent investors allocate capital accordingly to different kinds of oil producers to maximize gains.

When you get an earful of chitchat about spare capacity, you know it’s time to load up producers that promise a lot of production growth. That’s pretty much where we are today.

However, you may ask: In a business environment that oil producers are told by the green revolutionaries to prepare for a terminal industry decline, are there any oil companies that didn’t get the memo?

We at The Natural Resources Hub, guided by the investment principle as I laid out in a recent interview, have gone to great lengths in the search of oil producers that are growth-potent, carry lower risk than the Exxons and Chevrons, and can still be bought on the cheap. From our carefully-picked collection of such gems, I present below Karoon Energy Ltd. (KAR.ASX)(OTCPK:KRNGF), which operates in deepwater Brazil.

Karoon mainly trades on ASX, with >2 million shares changing hands on an average day. The stock also trades on the OTC-Pink board with limited liquidity.

Melbourne-headquartered Karoon Energy was formerly known as Karoon Gas Australia Ltd. It used to be a greenfield explorer, especially for natural gas. Together with ConocoPhillips (COP), it discovered the multi-Tcf Poseidon gas discovery in 2009, which was sold to Origin Energy (OTCPK:OGFGF) in 2014 for US$600 million firm and US$200 million contingent.

Karoon Energy entered the Santos Basin, offshore Brazil, in 2008, winning five blocks during Bid Round 9. True to its reputation as a greenfield explorer, Karoon made three oil discoveries between 2012 and 2015, including the Neon and Goiá light oil finds (Fig. 1).

Fig. 1. The Campos and Santos basins, with participating oil companies (left) and a schematic cross-section of Brazilian offshore oil basins (right), modified from the 2021 Annual Report of the company.

With US$600 million in hand from the sale of Poseidon, Karoon sought to become a producer. It began to negotiate with Petrobras (PBR) in 2016, in an attempt to acquire two oil projects, including Baúna. But the deal fell through, thanks to a legal challenge from the Brazilian oil tankers union.

Karoon finally signed a binding sale and purchase agreement in July 2019 to acquire an operated 100% interest in the BM-S-40 concession in the Santos Basin for US$665 million, effective January 1, 2019. The acquisition was completed on November 9, 2020.

Even though shareholders seemed to like the purchase of Baúna, there was lingering doubt – as reflected in the persistent undervaluation of the stock – about the competence of the then management team in efficient capital allocation and management of producing assets (Fig. 3).

In response to that doubt, Karoon founder and long-standing CEO Robert Hosking announced in July 2020 he would retire so that an independent executive search firm could complete a global search for a replacement CEO.

In October 2020, Julian Fowles was appointed as the company’s new CEO and managing director. Having earned a Ph.D. degree in geology at the University of Cambridge, Fowles spent 17 years working in various global assignments at Shell, Woodside Energy, Cairn Energy, Petra Energia, and Oil Search, including five years as the exploration and new ventures Manager in Brazil.

Karoon has come up with a strategic plan to diversify portfolio beyond a single producing asset (Baúna), and grow production organically by developing its post-salt fields in the Santos Basin and through possible acquisitions. 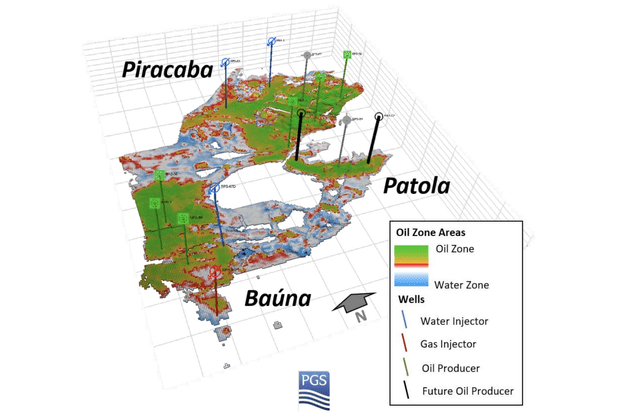 Fig. 5. The Baúna project timeline, from Karoon presentation of October 28, 2021.

The workover campaign is expected to restore Baúna production to an initial peak rate of ~20,000 bo/d going into 2023. By the 1Q2023, Patola first oil will potentially increase production to ~30,000 bo/d. Through optimized reservoir management, well operations, cost structure and facilities integrity, Karoon hopes to mitigate decline rate to <15%. Through these two projects, Karoon is poised to grow production base while materially improving the unit cost (Fig. 6).

The integrated Development Plan for the Neon and Goiá fields was approved by ANP on June 16, 2021. 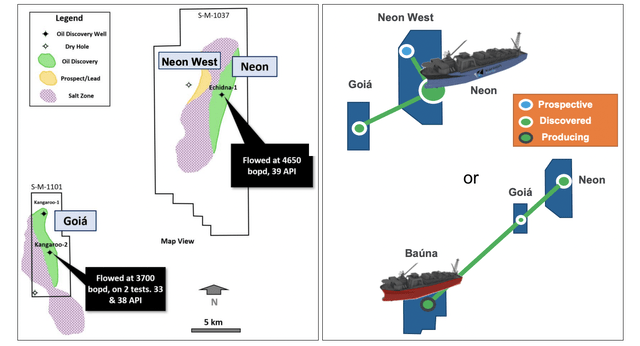 Fig. 7. A map showing the incremental resources at the Goiá and Neon fields (left), and an illustration of development options of Goiá and Neon (right), modified from Karoon presentation of October 28, 2021.

Table 2. The contingent resource estimates for the Neon (fka, Echidna) and Goiá (fka, Kangaroo) fields, from the news release of May 8, 2018.

Karoon is currently undertaking further engineering studies on Neon to optimize the development plan. The company may drill a control well using the Maersk Developer rig, possibly in the 1Q2023 following the Baúna intervention campaign and Patola development. A FID in respect of the Neon field will probably be reached by the 2Q2023.

With US$25-35 billion of assets across upstream, midstream and downstream yet to divest, Petrobras is a motivated seller of offshore assets. Up to 600,000 boe/d could be divested in 2021-2025, according to Petrobras 2020 annual report. Several high-quality assets are expected to be marketed over the next 24 months. The state company’s asset divestment program will make high-quality conventional E&P assets with large remaining resource and redevelopment potential available to acquirers such as Karoon.

Having been operating in offshore Brazil since 2008, Karoon is well placed to take advantage of the ongoing M&A wave, competing against Brazilian independents and private equity (Fig. 8). 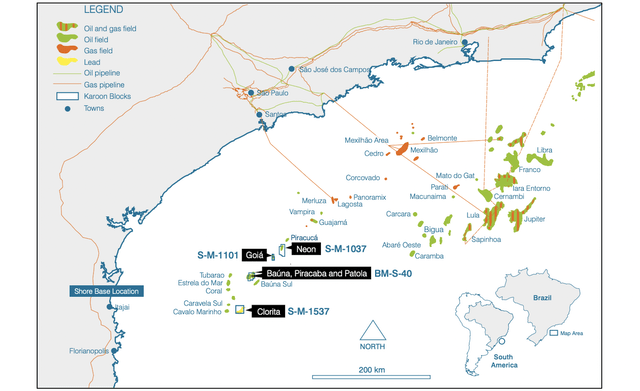 Fig. 8. The Santos Basin and Karoon’s assets, from the 2021 Annual Report of the company.

The transformational change from a pure-play explorer to an oil producer is evident in Fig. 9. Since taking over the Baúna operatorship in December 2020, Karoon has begun to generate a fair amount of free cash flow. As a result, net debt has declined, with a net debt/FCF ratio at a healthy level of 1.2X (Fig. 10).

Fig. 9. The quarterly revenue, EBITDA, net income, and FCF of Karoon Energy, compiled by Laurentian Research for The Natural Resources Hub based on the company released information.

Fig. 10. Net debt at the end of quarter of Karoon Energy, compiled by Laurentian Research for The Natural Resources Hub based on the company released information.

In the September 2021 quarter, Karoon realized US$67.86/bo oil price, pulled in ~US$35 million in revenue from each of the two cargo shipments, and generated US$60 million of operating cash flow before long-lead capex, corporate and tax outflows of US$18 million (Fig. 11). A cargo shipped in early October 2021 grabbed ~US$40 million in revenue, thanks to yet higher realized oil prices.

The stock is presently valued at an EV/EBITDA multiple of 6.2X and a P/FCF multiple of 5.6X on a 2Q2021 run-rate basis, which is on par with other free cash flowing oil producers despite its healthy balance sheet, and production growth outlook at a CAGR of 69.5% in the next couple of years.

Although Karoon pulled off an impressive turnaround in operations, the market has not given it due credit. The pertinent questions are:

I believe Karoon has a highly visible growth prospect in the near to medium term for the following reasons:

There’s definitely uncertainty associated with the new management, subsurface geology, and Brazil as a jurisdiction. However, discerning investors take calculated risk to reap a big return. As Warren Buffett pointed out,

“The future is never clear; you pay a very high price in the stock market for a cheery consensus. Uncertainty actually is the friend of the buyer of long-term values.”

Karoon is one of the few pure-play deep-water oil producers that also promises rapid production growth. The company checks a lot of boxes, with a healthy balance sheet, abundant free cash flow, and a technically competent management.

Perhaps due to recency bias and a bit of unsureness about the new management, the market is yet to give Karoon due credit for its pulling off a turnaround and for its highly visible near-term growth prospect. However, as the oil bull roars on, it may not take long before this undervalued stock delivers positive surprises with its 69.5%-CAGR production growth.

Based on the above analysis, I believe Karoon represents a great opportunity for capital appreciation-oriented investors – who likes the subsurface prospectivity and favorable fiscal regime of deepwater Brazil but who frown upon Petrobras’ governance.