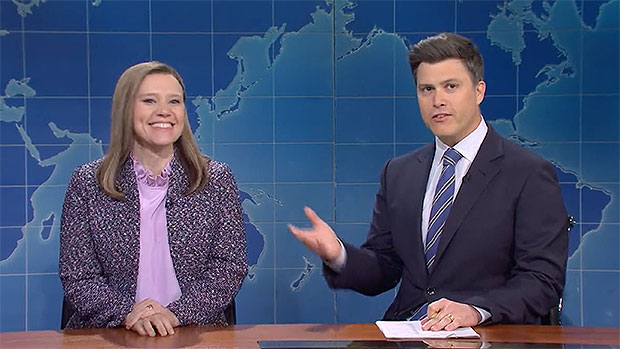 
Kate McKinnon‘s Amy Coney Barrett couldn’t sharing her thoughts on the Roe v Wade controversy on this week’s Saturday Night Live. The comedian, 38, popped up alongside Colin Jost on the May 7 episode. “I am jazz induced,” she began, seemingly in reaction to Roe v Wade potentially being overturned, and therefore making abortions illegal in thirteen states immediately, with others potentially following suit.

“I’m guessing you’re pretty happy with the draft of the ruling?” Colin questioned, as she acted surprised. “I don’t know what would make you think that, other than everything I’ve ever said! But I listened to the case with an open mind and I asked all the question,” Kate’s Amy, wearing a lavender colored shirt, said (leaving ‘question’ singular).

“You were asking about safe haven laws where you can legally leave a baby at a fire station, no questions asked?” Colin posed back.

“That’s right Colin, I don’t understand why we need abortion because you can leave a baby anywhere in the United States. What’s the big deal? Just pop it!” she said. “Just, do the nine and plop. Do your nine, leave it on the sidewalk, wrap it up … put it in a basket,” Kate’s Amy urged, pushing a conservative view with plenty of humor (it is SNL after all).

“You’re a murderer if you have an abortion, but you’re not a murderer if you put a baby in a bag in mailbox and that tracks. Give it to a stork, who will give it to a lesbian,” she went on. “The lesbians would be happy because there’s more babies. So just do your nine and plop.” Colin appeared confused about why she continued using the term “nine” but Kate’s Amy didn’t seem interested in providing an explanation.

Gunna: 5 Things To Know About Rapper Making His Debut on ‘SNL’

“I have seven children and a job and I make it work. So why every other woman can make it work and not me?” she asked. “If you get pregnant and you’re not married, you don’t have to go to some weird convent anymore — you just give a baby to a panther, Jungle Book it and that’s your nine!” she added, referencing the classic Disney film.

“What is more traumatic? Safely ending an early pregnancy or giving birth to a baby you can never see again because you put it on a ferris wheel? These lesbians are going to have a crap load of babies!” she also said.