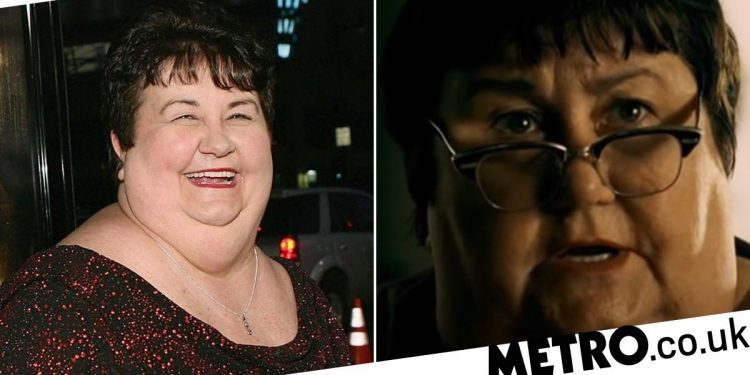 The late star died on April 4 after battling a short illness.

Her family told Deadline: ‘Kathy will be missed by her family and friends and left an impact on all she encountered during her life on this Earth.’

Lamkin featured in a scene opposite Javier Bardem’s antagonist character Anton Chigurh in the American western No Country For Old Men – which won outstanding cast In a motion picture at the 2008 SAG Awards.

The Texas native appeared in a number of TV shows and films in the 90s – from Miller & Mueller to Fools Gold – but it was her spectacular performance as The Tea Lady in the 2003 remake of The Texas Chainsaw massacre that caught everybody’s attention.

She also starred in the 2006 prequel Texas Chainsaw Massacre: The Beginning.

Lamkin went on to star in several movies and programmes between 1990 and 2014, including  Kiss Kiss Bang Bang, Waiting For Guffman, Confession, In The Valley Of Elah, and The Heartbreak Kid.

She also had roles in notable TV shows including Malcolm In The Middle, My Name Is Earl, Nip/Tuck, Bones, and Boston Legal.

She made her last appearance in the 2014 short film Chimeras.

The late actress also taught theatre arts at Codwell Elementary School in Houston, and served as a producer on a number of short film productions.

Lamkin is survived by her husband of 52 years, Stephen L. Lamkin, her daughter Kati, her son Greg and her grandchildren Benjamin and Morgan.


MORE : You, Me & The Big C host Deborah James struggling to adjust after month-long stay in hospital amid cancer ordeal: ‘There have been tears’

Lesson Learned: Put Everything In Writing