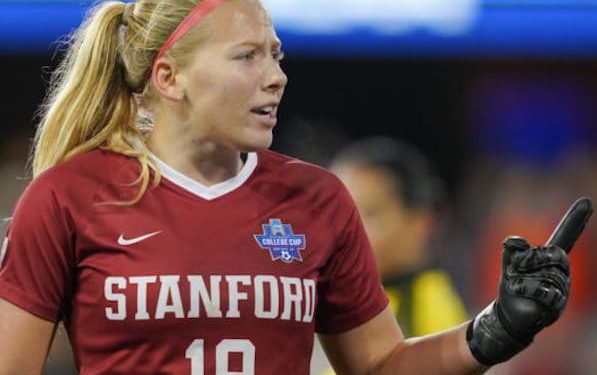 Tragedy has struck the world of collegiate athletics:


Katie Meyer, a captain and goalkeeper on the Stanford Women’s Soccer Team, was found dead on Wednesday, the university announced this afternoon.


No cause of death has been announced at this time.


“It is with great sadness that we report that Katie Meyer, a senior majoring in International Relations and minoring in History, a Resident Assistant, and a team captain and goalkeeper on the Stanford Women’s Soccer Team, has passed away.


“Please join us in offering our deepest condolences to her parents and sisters.


“We would also like to extend our heartfelt condolences to Katie’s friends, hallmates, classmates, teammates, faculty and coaches.”


Meyer made a pair of critical saves in a penalty shootout to help Stanford win the national championship in 2019.


Her intense and excited reaction to one of these saves was featured on ESPN’s SportsCenter and went viral at the time; we’ve posted a screen capture of it below.


Continued Stanford in its statement:


“Her friends describe her as a larger-than-life team player in all her pursuits, from choosing an academic discipline she said ‘changed my perspective on the world and the very important challenges that we need to work together to overcome’ to the passion she brought to the Cardinal women’s soccer program and to women’s sports in general.”


School officials also said that counseling services are available to all students and student-athletes, explaining that Stanford “will continue to reach out and offer support to the many campus community members who knew her.”


In total, Meyer played in 50 games across three seasons, producing 20 shutouts and winning 34 matches while only allowing 35 goals.


According to The Stanford Daily, an unidentified undergraduate student — who was a member of the women’s soccer team — was found dead in an on-campus residence on March 1.


Around 11 a.m. on Tuesday, ambulances surrounded a residence hall on campus.


As the horrible news of Katie’s death was made public, the tributes started to pour in on social media.


And the NCAA wrote:


“We join Stanford in mourning the loss of Katie Meyer. Our condolences to her family, friends and teammates.”


Last month, Meyer started a live show called Be The Mentality, posting about it as follows on Twitter:


“GUYS i’ve been so excited to finally start my show 🙂 we’re going to be talking life, sports, college, all the good stuff.”


Her first episode, released Februarry 13, featured her dad Steve to “hear his side of their story.”


We send our condolences to Katie Meyer’s friends, family members and loved ones. May she rest in peace.

When you win a multiple offer suituation

Samsung might be throttling the performance of 10,000 apps (Updated) – Android Authority

Samsung might be throttling the performance of 10,000 apps (Updated) - Android Authority