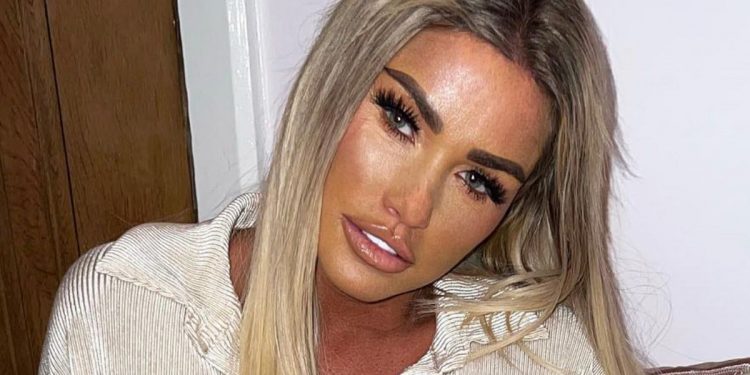 
Katie Price has hinted she is feeling as upbeat as ever as she teased her OnlyFans subscribers with saucy pics following her shock split from fiancé Carl Woods.

The 43-year-old mother-of-five has been sharing risqué snaps via the adult content photo and video sharing website – which fans can subscribe to for a monthly or annual fee.

And she has continued to churn out her content despite her romantic life taking a nosedive – as she split from 33-year-old car salesman Carl who she had been planning to wed this year.

The couple ended their romance last month following less than one year of being engaged – with Carl accusing Katie of cheating on him.

The one-time Love Island contestant might want to look away from Katie’s OnlyFans page, therefore, as she is attempting to entire others to gaze upon her scantily clad body.

The star shared an update via her page on the site, writing: “Feeling extra playful tonight. So thought I would send you these” – along with eyes emojis.

She then shared photos of herself posing on a bed while clutching a bouquet of pink flowers and while wearing a preppy pink cardigan.

However, from he waist down she wore next to nothing – sporting a pair of see-though lace knickers and bright pink thigh belts on each leg.

She teased: “Make sure you don’ miss out on the PPV I’ve been sending you from this set.

“Some of my best yet” – along with a coy face emoji and a red heart emoji.

While Katie is focusing on bringing in more money with her OnlyFans venture, the star has seemingly struggled to attract an audience with her titillating content.

The glamour model joined the website at the start of the year and promised to release material that would empower and inspire women.

She said at her highly publicised launch: “I want to make a stand for all women and my OnlyFans channel will be about 100 per cent body positivity.

“I see my OnlyFans channel as a place I can feel secure, confident, empowered and beautiful. Yes, there will be some glamorous shots, because as everyone knows I love being in front of the camera.

“But more importantly, this will be a place for me to share my world and my adventures with my closest supporters in my own authentic voice.”

But Katie has been forced to slash the cost of her subscription fee as she struggled to attract an audience – prompting cruel trolls to target the star.

One wrote via Twitter : “She can’t even give it away these days, lol” and another suggested: “Not a popular as you thought you are [sic].”

Meanwhile, Katie is said to be ploughing ahead with her plans to get married this year – despite the fact her relationship with Carl came to an explosive end in March.

A source told Closer this month: “Carl is very green-eyed, and when he dumped her, she barely showed any emotion – confidently insisting he’d come running back in a few days once he’d calmed down.

“She dismissed it as a bad row and is adamant they’ll still be getting married – even continuing to make plans despite everything.

“She’s even joked to pals that if Carl doesn’t come back, she’ll have to find another man to marry her in less than two months!

“Family and friends have urged her to let it go and have a break from men given she’s clearly in such a troubled place, but the thought of being alone is her worst nightmare.”