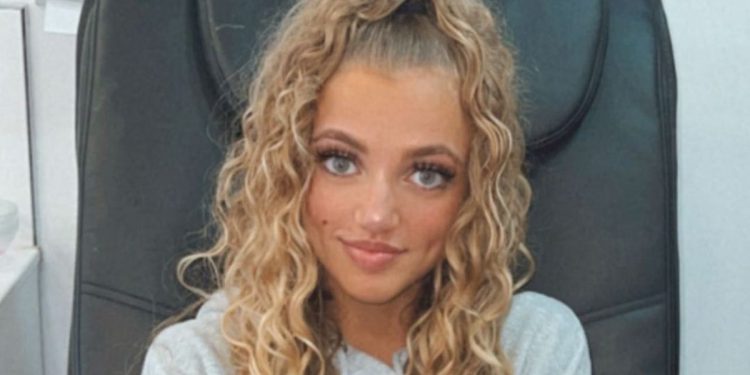 Princess is the spitting image of her mum Katie Price (

Katie Price couldn’t help but pour praise on her “insanely stunning” daughter Princess as they enjoyed a day out at the beauty salon together.

The Only Fans star took her 14-year-old daughter and a pal to get pedicures and joked the pair of teens were “double trouble”.

Taking another snap of her oldest daughter, Katie shared: “Who agrees that princess is insanely stunning?

“I know she my daughter but genuinely think she is [sic].”

Princess is wearing her long blonde hair in her natural curls for the snap – and looks a lot like her famous mum as a teenager.

The teen also appears to be wearing makeup and false eyelashes as she enjoys a weekend with her mum.

Earlier this year, Princess’ dad Peter Andre admitted he still doesn’t like his daughter posting pictures in her make-up.

Writing in New! Magazine, the singer said: “Although Princess enjoys make-up, I’m still funny about her posting pictures wearing it as I think she’s a natural beauty.

Pete recently revealed that his eldest daughter wants to start earning her own money, with the teenager hoping to be a babysitter and dog walker soon.

Pete said it “may be a bit early” to look after the kids but is proud she wants to work.

“We can only really do that if Junior is also around and there’s another adult in the house,” he however said.

Babysitting isn’t the only job that his daughter is considering though, he said, with him further adding: “She’s also asked about walking the neighbours’ dogs.”

He said he was “really proud of her for taking that initiative” and went on to reveal his first job, which he had when he was a little bit younger than Princess .

He said in his latest column that his first job was “stacking supermarket shelves” on a weekend when he was 13.

He commented: “I think it’s good for kids to learn about the responsibility that comes with a job, plus timekeeping and money management.”

Katie enjoys posing for snaps with her mini-me
(

The Essex car dealer and one-time Love Island star is said to have dumped the former Page 3 model at the weekend after accusing her of cheating on him.

It is claimed Katie had been messaging her ex, personal trainer Kris Boyson, behind Carl’s back.

She is even said to have borrowed teenage daughter Princess’ phone so she could send flirty messages from her Instagram account asking to meet up.

“Katie was messaging Kris when she was telling everyone she was madly in love with Carl,” the source told The Sun.

“She used Princess’ Instagram account to send him messages. In the messages Katie was flirting and asked Kris if he wanted to meet with her.”