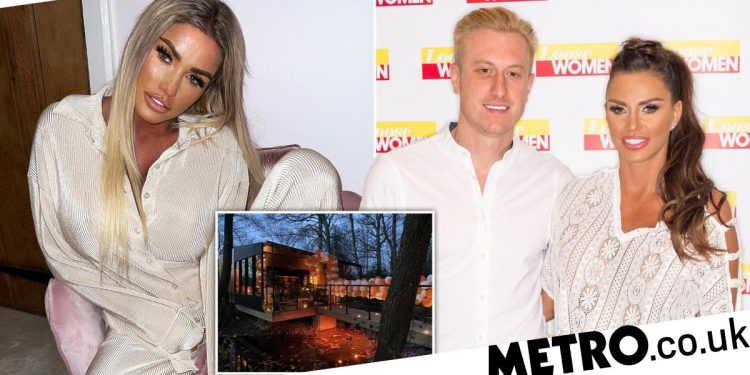 
Kris Boyson has shut down speculation that he’s back together with ex-fiance Katie Price after speculation they were at the same hotel last week.

The pair, who split in 2019 after more than a year together, appeared to share photos from the same luxury hotel room at The Copper Cabin, which can be booked through the website Secret Cabins.

They may not have been alone either as Katie tagged her eldest son, Harvey Price, in one of her photos.

It came just days after Katie split from fiance Carl Woods after more than a year.

However, Kris has now denied the claims of a reconciliation, insisting to friends that while he does hold fond memories of spending time with Katie and her five children – Harvey, Junior, Princess, Jett and Bunny – he is very much a single man.

‘We’re not together anymore. I wish her all the best,’ he reportedly said.

He added to The Sun: ‘I do miss our family life together though. There are no hard feelings, just one of those things. I’m single and I’m starting to put myself back out there. So who knows.’

A friend of the fitness instructor also shut down the rumours recently, telling MailOnline that it was ‘just a coincidence’ that they stayed at the cabins within the same week.

Katie, 43, and Kris, 33, first began dating in 2018 and got engaged the following year. However, they broke off the engagement just a few weeks later and the former glamour model went on to find love again with car dealer Carl.

The My Crazy Life star got engaged to Carl, 32, in April 2021 but they ended the relationship in March following a ‘difficult few months’.

‘It really seems to be over for now and they are both very sad about it,’ an insider claimed, but added that it wouldn’t be a surprise if they got back together.


MORE : Piers Morgan urges Katie Price to stop her ‘chaotic life’ for her children: ‘Someone has to tell you some home truths before it’s too late’


MORE : Katie Price wearing engagement ring again despite ‘split’ from Carl Woods after filming on Sussex beach without it

10 things to know about working with international buyers