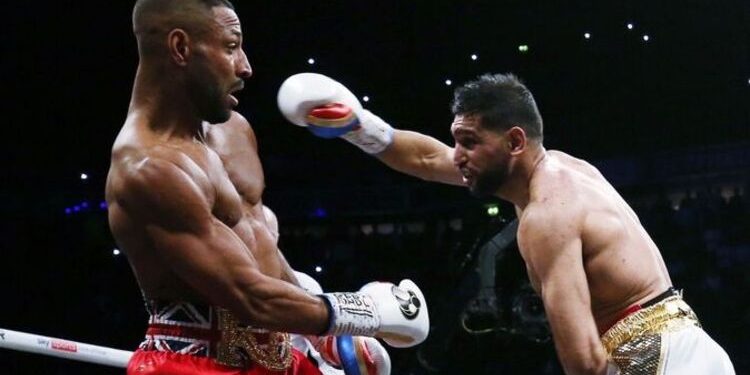 
Kell Brook got the win of his career in the War of the Roses as he walked right through his bitter, British rival, earning the legacy-defining bragging rights he so desperately craved with a sixth-round stoppage of Amir Khan. The former unified light-welterweight champion was too brave for his own good and had to be carried out on his shield after refusing to lie down before the referee intervened with a smart stoppage to prevent an inevitable knockout.

A grudge match that was 17 years in the making, many believed this fight was past its sell-by date but boy did it deliver in front of an electric atmosphere at the AO Arena in Manchester.

With eagle-eyed young bucks Chris Eubank Jr and Conor Benn sat ringside, Brook seized his opportunity in the limelight to show why he still rules the domestic roost, he is still king of the pool.

Brook only ever seemed to be one punch away from victory but Khan continued to suck up and absorb the punishment, taking some heavy blows to the jaw and temple before he was eventually put out of his misery by the man in the middle.

There was drama before the pair even climbed through the ropes though when a dispute backstage over Brook’s gloves created hostility between the two camps.

The former IBF welterweight champion was even told he had to change his gloves in the ring before the fight – or he would not get paid.

So that’s what he did and despite not warming up in the new pair, Brook did not want to make excuses, simply turning in the performance of his career.

He predicted fireworks from the opening bell, stating this would be a fight in a telephone box and he was keen to deliver on that promise.

We were barely two minutes into this highly-anticipated grudge match when he landed a stiff, left jab that caught Khan, whose legs turned to rubber.

Khan’s chin has been questioned over time following devastating knockout defeats to Breidis Prescott, Danny Garcia and Canelo Alvarez and it wasn’t long before Brook put his punch resistance to the test.

His opponent did not look at all convincing – despite shaking his head – he continued to spring around like a kangaroo, as Brook continued to control the centre of the ring.

King, to his credit, looked to have cleared his head as he then bid to utilise his superior hand speed, before beginning to ask questions of his own.

Brook had the answers though and despite being tagged, he was dictating the pace of this fight. He was barely moved as Khan upped the pressure.

Round 3 belonged to Brook, who had Khan rocking once again, a slick left-right cross wobbled his rival, who look laboured up against the ropes. Once again, he was saved by the bell.

Brook continued to have huge joy, beating Khan to a pulp but the resilient Olympic silver medalist was determined not to hit the canvas.

Round 6 proved a step too far though as Brook went for the jugular. He started to up the ante as he went in search of a knockout following his continued domination and his ruthless, flush shots had caused serious, physical damage to Khan’s face.

The referee had seen enough and stepped in before Khan ended up on his back or worse, his face.

This night belonged to Brook, who was evidently rattled in the build-up to this fight but in the end, Special K done his talking in the ring with a performance that suggests he may still have more to give.

After his 40th career triumph – having only tasted defeat against pound-for-pound greats Gennadiy Golovkin, Errol Spence Jr and Terence Crawford – this was undoubtedly Brook’s greatest night of all.

Credit must also go to Khan for playing his part in a classic. Both fighters have now etched their name into British boxing history.