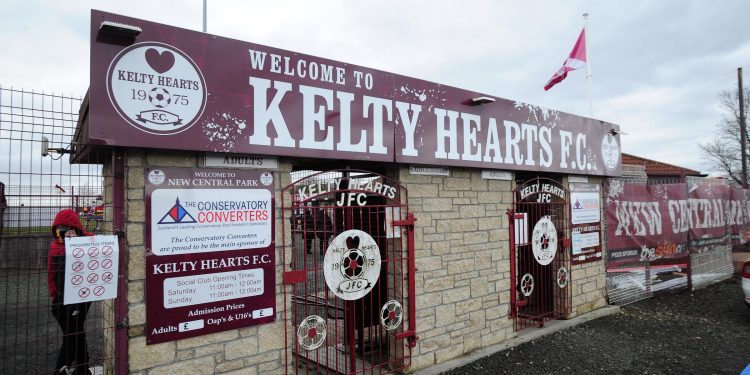 FANS of Kelty Hearts can put themselves ‘in with the bricks’ of the club they love as part of another ground development.

The ambitious club, who are top of League Two and closing in on the title and promotion in their first season as an SPFL side, are giving supporters the chance to etch their names into its fabric in a new addition to New Central Park.

As part of ongoing work to improve the ground, which recently has included an extension to the changing rooms, the completion of the I&H Brown Lounge for hospitality guests, club shop, catering facilities and cladding and signage on the social club and pavilion, as well as the installation of a new PA (public address) system, Kelty are aiming to build a “new, modern brick wall” at the main entrance to the ground.

Within that will be a supporters feature wall, and fans are being offered the chance to purchase a brick and have their name, or a bespoke message, engraved on them.

The club hope to have the wall built for the start of the summer and general manager, Dean McKenzie, said that continued investment in the ground will “stand the club in good stead for years to come”.

“We are into the final quarter of the season now, and the home straight, as we chase down a remarkable sixth league title in eight seasons,” he said.

“The gaffer (Kevin Thomson), his staff and the players have been nothing short of magnificent over the season, which has absolutely flew in.

“I’m sure we are all agreed that we all have full confidence in Kevin and the lads to pick up their deserved winners medal in the not so distant future.

“Once again we continue to invest off the pitch, which has already seen the completion of the extension to the changing rooms, I&H Brown lounge, club shop, snack shack, pie hut and new cladding and signage on the social club and pavilion.

“It has been a huge team effort, a big ask financially and another taxing year project managing the works as volunteers. It’s been a real labour of love, but it’s been pleasing to see the end results, which will stand the club in good stead for years to come.”

Kelty have also recently put forward plans to create a new South Stand, which would include a new hospitality lounge / community cafe; and canteen, kitchen and toilet facilities that would be of use for the community on non-match days; as well as an LED scoreboard.

The new stand would increase capacity by 500 and, last year, the club launched an investment fund which they hoped would raise £150,000 towards its development.

Bricks for the supporters wall cost £60, or £100 for two, and can be bought online here.

Windows 11’s next big update for 2023 is already underway

Windows 11’s next big update for 2023 is already underway