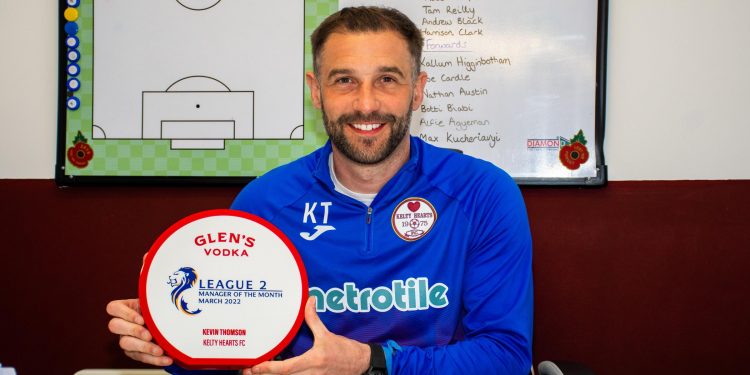 KELTY HEARTS boss Kevin Thomson has scored an awards hat-trick after he was named the SPFL League Two Glen’s Manager of the Month for March.

The 37-year-old, in his first managerial role after taking over at New Central Park in the summer, led his team to the title – in their maiden SPFL campaign – with a 1-0 win over Stenhousemuir at the end of the month.

That concluded an unbeaten March for Kelty, who made it nine games without loss following last Friday’s draw at Edinburgh City.

Those results came after wins over Cowdenbeath, Stenhousemuir – twice – and Albion Rovers, as well as draws with Elgin City and Albion.

After picking up the award, Thomson said: “Delighted to win manger of the month, it ended up becoming a defining month with Max (Kucheriavyi) scoring the winning goal that crowned us champions.

“The players take all the credit; seven games, five of which in 14 days and added with two derbies and a trip to Elgin. The group never stop, so this one is for them.”

Colin Matthews, CEO of Glen’s owner the Loch Lomond Group, added: “Congratulations to Kevin Thomson and everybody involved with Kelty Hearts on what has been quite an outstanding season, winning the League Two title with five games to go.

“Playing six league matches in March was a hectic schedule, especially with a first league title to be played for, so again congratulations to Kevin and his coaching staff for guiding the team through this important period.

“The fact that this is Kevin’s third Scottish League Two Glen’s Manager of the Month award highlights what a good season Kelty have had, and their record of 22 wins, seven draws and just the three defeats in the 32 games played so far is a testament to the ability and teamwork of all involved.”