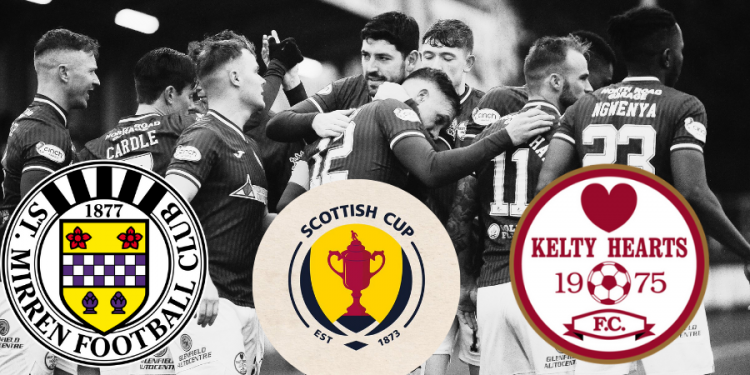 Alex Greive’s first half goal, followed by a Jordan Jones Strike and a Greg Kiltie brace, eased the Premiership side into the quarter-finals as the visitors were unable to repeat the heroics they displayed in knocking out holders St Johnstone in round four.

Greive’s 15th minute header – on the rebound after Darren Jamieson superbly saved from Richard Tait – gave Saints the lead, which Jones added to four minutes after the break with a superb strike into the top corner.

Just before the hour mark, Kiltie’s fine finish put the contest to bed, before he added a second late on as Saints marched on to the quarter-finals, leaving Kelty to reflect on an historic run to round five.

Until this season, they’d never gone beyond round two, so it has been a memorable campaign in the competition for Kevin Thomson’s team.

Despite trailing at half-time, they gave as good as they got in the opening 45, restricting their opponents’ chances without creating too many themselves.

But, in the end, the Premiership team’s quality shone through – particularly with Jones’ strike – as their focus now fully turns onto League Two duty.

The win over holders St Johnstone will live long in the memory and, whilst they didn’t disgrace themsevles in this one, the Paisley team were simply too good.

Attention now turns to a huge league match next weekend where Kelty go to Forfar Athletic, their nearest challengers, aiming to protect and increase a 10-point advantage.

Visiting boss Thomson made three changes to the side that defeated Elgin City last weekend in League Two.

Daniel Finlayson, on loan from Saints, missed out, as did Scott Hooper, whilst Alfredo Agyeman – who scored a double in that 4-0 win – dropped to the bench.

Top scorer, Nathan Austin, replaced him as the focal point of the Kelty attack, while Ross Philp and Jordon Forster came in for Finlayson and Hooper.

For the Buddies, Jim Goodwin retained faith in the team that defeated St Johnstone – who Kelty knocked out in round four – midweek as they sought to a place in the last eight having reached last season’s semi-finals.

In the backdrop of a superb atmosphere – aided magnificently by a tremendous Kelty support, which bolstered by seven free coaches laid on by the club – the visitors began encouragingly.

They had the contest’s first effort of note in five minutes, when Michael Tidser sent a 20-yard free-kick over the bar, but their bright opening was somewhat punctured with 15 minutes gone.

And it was a moment where you had to feel sorry for Jamieson in goal.

From Marcus Fraser’s cross from the right, he did brilliantly to save from Tait at his near post.

But, as the ball was parried into the air, Grieve reacted quickest to head home the rebound from six yards and give the Premiership side the initiative.

If you expected there to be a barrowload of chances for the Buddies thereafter, you’d be mistaken, as Jamieson didn’t have a great amount to deal with.

The home side did dominate much of the ball, but they seemed a bit blunt in relation to creating clear opportunities, with a Connor Ronan effort that was easily held, and an effort on the half-turn at the edge of the box that sailed over from the same player, as much as they had before the break.

However, at the other end, Jak Alnwick wasn’t really troubled either, with a tame Joe Cardle shot about as much as he was called upon to do, although there was some encouragement from the visitors late in the half.

Austin and Kallum Higginbotham combined well to find Cardle in the box who attempted to check inside his man.

Despite going over, the challenge by his opponent was a good one, and the chance to get a shot at goal was gone.

At the interval, Goodwin switched things around, subbing Tait and Fraser for Ryan Flynn and Scott Tanser, and within four minutes, it was one of his starters that doubled his team’s lead.

And what a goal it was.

A short corner on the left was taken to Jones who, on his right foot from the edge of the box, arrowed an unstoppable shot into the top corner of the far post, giving Jamieson no chance.

It was a marvellous goal that gave the Buddies breathing space, and made an already difficult task for Kelty an even harder one.

Thomson sent on ex-Saint, Thomas Reilly, and Alfredo Agyeman, for Andrew Black and Cardle in a bid to try and find a way back into proceedings, but just before the hour, the tie was all-but over.

It was, once more, lovely play from Saints, who worked the ball nicely into the feet of Kiltie, who placed a precise shot low beyond Jamieson and into the far corner of the net from the edge of the box.

To their credit, Kelty kept plugging away – encouraged by their supporters – and subs Botti Biabi and Agyeman combined to offer the latter a shot at goal, which Alnwick parried, before Higginbotham sent a decent effort from a free-kick straight down the keeper’s throat.

Greive almost added a fourth when he took the ball out of the air well, turned, and shot just past the far post, while there was almost a goal for Kelty to cheer at the other end when an excellent Jamie Barjonas run ended with him pulling the ball back for Biabi, but the striker couldn’t keep his shot down from 15 yards.

Agyeman then blazed over for the visitors as the clock ticked down but it was St Mirren who added a fourth with five minutes left.

A loose pass from Robbie McNab across his own box was seized upon by Kiltie, who had the simple task of rolling the ball into the net and easing St Mirren into the last eight – and ending Kelty’s superb cup run.

Uncharted's Nathan Drake and Cloe are coming to Fortnite next week