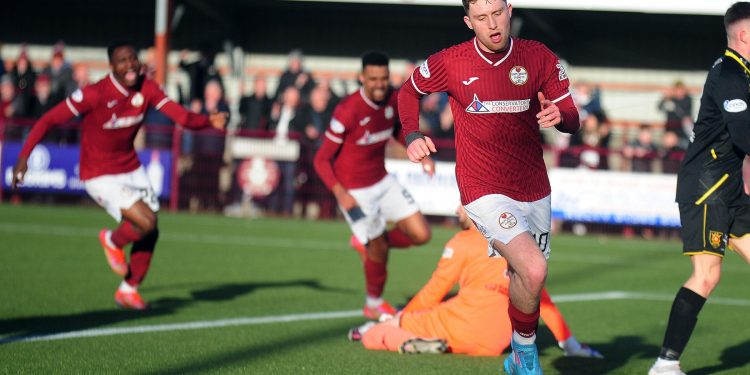 JAMIE BARJONAS showed why his Kelty Hearts manager hopes to tie him down to a new contract with a capital cracker.

The 23-year-old, who signed a one-year deal with the club last summer after arriving from Rangers, scored a sensational goal for the champions at Edinburgh City as they extended their unbeaten run to nine matches.

Although it was cancelled out by Ryan Shanley’s second half spot-kick – awarded after goalkeeper Darren Jamieson was judged to have impeded home substitute, Ouzy See – Barjonas’ wonder strike, which saw him flick the ball over a defender before lashing a volley beyond the helpless Brian Schwake in the home goal, was the highlight of what proved to be a frustrating evening for Kevin Thomson.

He saw centre back, Tam O’Ware, stretchered off and taken to hospital with an ankle injury following a challenge by Ben Stirling, and was shown a red card late on by referee, Matthew MacDermid, for voicing his opinion over what he felt were several challenges on his players that went unpunished.

Kelty, who clinched the title the previous week, were given a guard of honour by their opponents but found clear opportunities limited in the opening period, with Barjonas having the best of them, denied by Schwake after being played in by Kallum Higginbotham.

Darren Jamieson, at the other end, produced smart stops to deny Anthony McDonald and Innes Murray, but it was the visitors who made the breakthrough two minutes after half-time – and it was a goal that was worth the entrance fee alone.

Michael Tidser’s diagonal ball to the left was nodded down by Robbie McNab to the edge of the box, where Barjonas – showing shades of Paul Gascoigne’s famous goal against Scotland – flicked the ball over Lee Hamilton before firing an unstoppable volley into the net.

It was a magnificent effort but, shortly afterwards, Kelty suffered a blow when O’Ware had to be taken from the field, while Alfredo Agyeman forced Schwake into a good save after being picked out by Barjonas.

However, in the 66th minute, Shanley levelled for Edinburgh from the spot after Daniel Finlayson couldn’t deal with Callum Tapping’s long ball into the box and, as Jamieson came out to win the ball, he was beaten to it by See.

There were opportunities at both ends, with neither team able to find a winner, leaving Thomson feeling frustrated, particularly with the referee.

“We’re pleased with parts of it but, getting a red card, and then having one of our top boys potentially looking like he’s got a bad ankle injury, is a kick in the teeth for us to be honest,” he said.

“I don’t know if Ben’s (Stirling) is a bad tackle or not, but we’ve got a player in A&E, and then Barjo skips by Innes Murray late on, and he has another kick at him, and it’s play on. But then, surely, it’s a yellow card? You can’t just kick people.

“There’s a lot of frustration but it’s amazing how many mistakes these referees make, I try and argue back, and you get a red card.

“There isn’t any accountability. That is the harsh reality. You challenge them, they say sorry, I made a couple of mistakes, but they make mistakes every week. It’s frustrating.

“I thought when we scored, we were well on top. We created some good openings, had some good play, and I thought we had them on the ropes really, just to go and score that second. I think it could’ve been whatever we wanted.

“But, ultimately, in football, if you don’t put the ball in the back of the net and you give critical goals away, it bites you in the backside.”

Thomson was, however, impressed with the performance of Barjonas, and is hopeful of sitting down with the midfielder to discuss terms for next season’s League One campaign.

“He’s a big talent and he is a joy to watch,” Thomson continued.

“When him and Kallum (Higginbotham) do click, and they play some of the play they play, they’ve got so much balance and such a good picture, especially in tight areas. They can just swivel away, they attract people to the ball, they’ve got the capabilities of pushing past them, so we’re delighted with him.

“As everybody knows, I love him to bits, and we’ll look forward to hopefully sitting down and having a chat for next season.”

Did Amy Schumer Steal Oscars Joke About Leonardo DiCaprio? Here’s What She Says…

WordPress founder and others inject $100m into NordVPN owner

WordPress founder and others inject $100m into NordVPN owner