Kendall Stanley: The horrors of Ukraine 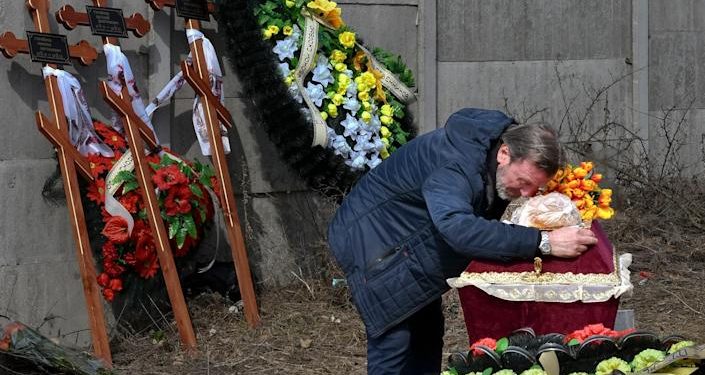 
The photos are soul-crushing — body after body populating the streets of Ukrainian cities in the wake of Russian bombardment and withdrawal.

Some tiptoe around the words “war criminal,” but that is exactly what the Russian troops and Russian president Vladimir Putin are — war criminals.

Thomas Friedman, writing in The New York Times on Monday, said Putin’s invasion of Ukraine and the subsequent indiscriminate bombing and civilian deaths mean that the order of things will never be the same.

“How does the world have an effective U.N. with a country led by a war criminal on the Security Council, who can veto every resolution? How does the world have any effective global initiative to combat climate change and not be able to collaborate with the biggest landmass country on the planet? How does the U.S. work closely with Russia on the Iran nuclear deal when we have no trust with, and barely communicate with, Moscow? How do we isolate and try to weaken a country so big and so powerful, knowing that it could be more dangerous if it disintegrates than if it’s strong? How do we feed and fuel the world at reasonable prices when a sanctioned Russia is one of the world’s biggest exporters of oil, wheat and fertilizer?

“The answer is that we don’t know. Which is another way of saying that we are entering a period of geopolitical and geoeconomic uncertainty the likes of which we have not known since 1989 — and possibly 1939,” Friedman wrote.

Indeed, how do we proceed?

More: Kendall Stanley: Driving on down the highway

More: Kendall Stanley: Where to from here

Putin has backed himself into a corner, his forces incapable of taking Kyiv and unable to get a quick victory in Ukraine. The countryside is littered with bombed out and disabled tanks and Russian forces have been pulled back to the eastern area of the country.

Ukrainian officials are warning residents of renewed fighting and urging them to leave the areas that may be affected, while vowing that Ukraine will fight back with everything it has.

Western allies are hampered by the fact Russia has more nuclear warheads than anyone else, and getting into a shooting war with Russia could and probably would have grave consequences.

There are still plans for peace talks but so far those talks have been non-starters. There is no way Putin is going to admit defeat or pull back from Ukraine. You would think that allowing some humanitarian escape routes could be arranged but you’d be wrong.

Friedman suggests that Putin’s failures in Ukraine will make Ukraine hostile to Russia for decades and will push Ukraine further into the embrace of the European Union, all while strengthening the NATO allies. In other words, Putin has to date not only not achieved his objectives but has ended up with the exact opposite results.

It’s easy for critics to say the West must do more for Ukraine and countries are providing more and more munitions and weapons systems to the Ukrainians. Yet there is only so much the West can do short of engaging directly with Russian forces.

Here we now sit — a war criminal at the controls and no clean exit strategy to get him to move off his desire to take over Ukraine, bombed back to the Stone Age if needed.

Those who knew Jim Doherty knew his boat name was MFB (the last one I remember was MFB III).

And they knew MFB meant My Favorite Blonde, a nod to his blonde wife, Betty.

For some of us around the News-Review office she was Betty D., and we all knew that Betty and Jim loved and cherished one another.

One big love of their life was square dancing and they were charter members of the Whirl-a-Way square dancers in Petoskey.

Unfortunately Jim died 40 years ago, but Betty kept on going and was 96 when she died March 31.

The obituary started, “Ladies and Gentlemen, Family and Friends …

“We are all here to celebrate the life and kindness of Betty Loyal Doherty.”

Warm, kind and a friend to all who knew her, that was Betty. As the obituary said, back together with her Jim.

— Kendall P. Stanley is retired editor of the News-Review. He can be contacted at kendallstanley@charter.net. The opinions expressed in this column are those of the writer and not necessarily of the Petoskey News-Review or its employees.

This article originally appeared on The Petoskey News-Review: Kendall Stanley: The horrors of Ukraine