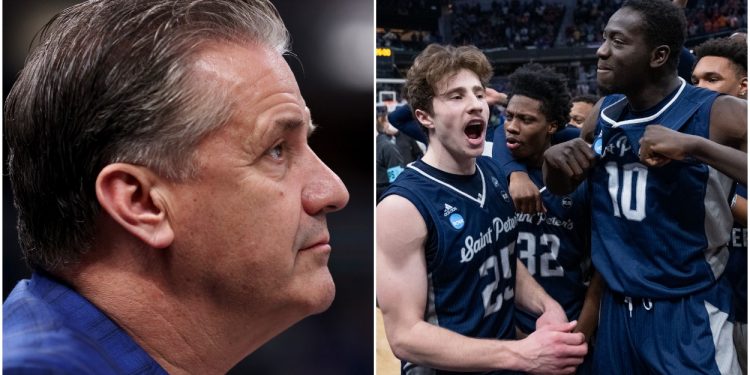 
Did you pick Kentucky in your Final Four? If so, there goes the bracket. On the first full day of the NCAA Tournament, the Kentucky Wildcats were dealt the biggest upset of the day and one of the biggest in recent memories. It defined March Madness.

Saint Peter’s, a small school from Jersey City, New Jersey, consisting of just 2,600 undergraduates students, were the ones who sent Kentucky home early. The Peacocks of Saint Peter’s (cool mascot, right?) got the victory in overtime on Thursday night.

Now, Kentucky head coach John Calipari faces a long offseason after another disappointing NCAA Tournament appearance, and even he had no answers following the heartbreaking defeat.

Saint Peter’s scratched, clawed, and hung around all game long. Then, Kentucky went up six with four minutes remaining.

But, the Peacocks didn’t quit. Instead, they fought even harder. Saint Peter’s scored seven straight points and tied the game on an eight-foot jump shot by Doug Edert — who ended up being the hero, finishing with 20 points and some massive plays down the stretch.

Then it went into an extra period, and Kentucky again got off to a lead before Edert again made a clutch shot to tie it with under three minutes to play.

From there, it was all Saint Peter’s who finished the game on a 10-4 run from that moment to get the historic upset. The mighty Wildcats — a Final Four choice by many — are heading home way earlier than anybody expected, and Calipari has no answers for the performance.

It wasn’t an enjoyable postgame press conference for Calipari. What made it even worse was that Saint Peter’s head coach Shaheen Holloway went on and on about the massive upset — and Calipari was right behind hearing most of it.

That stings, and the bitter taste in Calipari’s mouth got even worse. But, still, he had no idea what to say. Nobody did.

Oscar Tshiebwe — one of the best players in college basketball — dropped a game-high 30 points and 16 rebounds on 11-16 in 43 minutes. He gave his all. Besides that, the only other Wildcat to score in double digits was Sahvir Wheeler, who finished with 11 points. This was the first time a Calipari-led Kentucky team lost in the first roundtoo.

The high-octane Wildcats offense got erased from the brackets by a school nobody had heard of until Selection Sunday (most people, that is).

The SEC powerhouse fell to a program from the MAAC and one that has a far lower budget for the sport than Kentucky.

The numbers are eye-popping, yet here we are. Madness.

The 15-seeded Peacoks etched their name into NCAA Tournament history

It isn’t very often that a 15-seed gets a Round of 64 victory. Even more impressive is that the Peacocks were nearly 20-point underdogs to Kentucky.

They made history in that regard, and they joined a shortlist of 15-seeds to defeat a 2-seed.

Oral Roberts did it last year and ended up in the Sweet 16. Can the Peacocks do the same?

Who knows, but this victory is historical and so shocking that the Saint Peter’s website crashed.

After the Wildcats loss, Kentucky fans wasted no time calling for Calipari’s firing, and the veteran head coach will have a ton of questions to answer over the next few months.

Kentucky just suffered the biggest loss in the Calipari era, so there is a valid case for him to be held accountable.

Oof. Yikes. Whatever word you wish to use. Nonetheless, brackets are busted.

Wrexham: Events planned as part of City of Culture bid