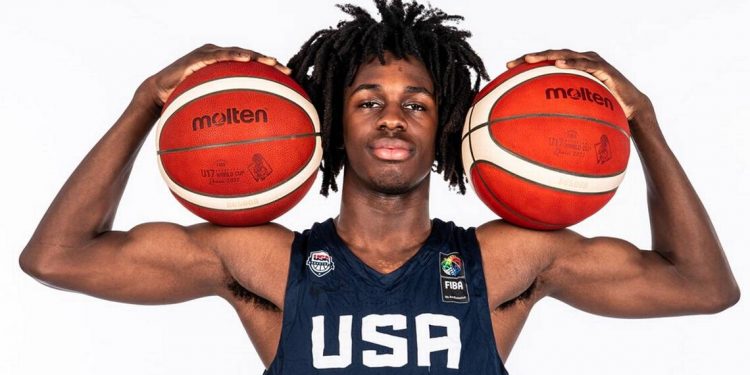 
As expected, five-star guard Ian Jackson has been filling it up at the FIBA U17 World Cup in Spain over the past few days. The 6-foot-5 prospect from Bronx, N.Y. — and a major Kentucky Wildcats recruiting target — recently ascended to the No. 1 spot in the 2024 rankings from Rivals.com, and he’s leading the USA Basketball squad in scoring at the FIBA event, which John Calipari and other college coaches traveled to see.

Going into Friday’s game, Jackson was averaging 18.0 points in 20.4 minutes per game for the Americans, who have a 4-0 record with an average victory margin of 53 points per game. Jackson, who earned a UK scholarship offer last month, is leading the team with 13.2 shots per game, but he’s hitting at 58.5 percent on field goals while making 47.1 percent of his three-point attempts. He’s also committed just two turnovers in the entire tournament so far. Pretty impressive.

Jackson told 247Sports analyst Travis Branham earlier this week that he was “infatuated” with Kentucky’s program at a young age, and it’s clear the Wildcats are one of the teams at the very top of his list. There are no Crystal Ball picks for Jackson yet, but Rivals.com national analyst Travis Graf put in a FutureCast prediction for UK this week. Jackson, who turns 18 next February, has also said he’s open to reclassifying to 2023.

Meanwhile, UK target Ron Holland is second on the team with 12.0 points per game, with fellow Kentucky targets Karter Knox (11.5) and DJ Wagner (10.0) also averaging double figures through four games. Next up will be a quarterfinal matchup against Serbia on Friday.

National analyst: Latest on DJ Wagner and other big storylines

More Next Cats links: Closer look at the USA guys on UK’s radar

Ben Roberts covers UK basketball, football, horse racing and other sports for the Lexington Herald-Leader and has specialized in UK basketball recruiting for the past several years. He also maintains the Next Cats recruiting blog, which features the latest news on the Wildcats’ recruiting efforts.
Support my work with a digital subscription
Tags: basketballKentuckyrecruitsSpainteamThrivingUSA
Previous Post

These 10 Dividend Aristocrat stocks have made investors a lot of money -- which might soar from here?