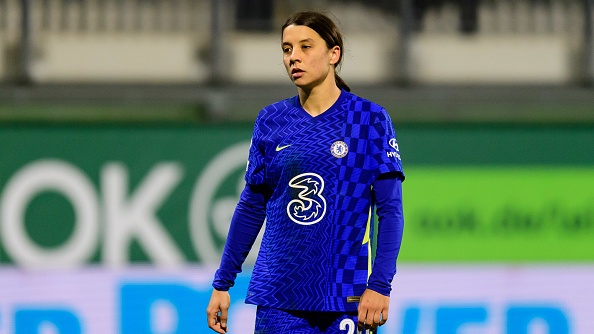 Sam Kerr has produced a brilliant stoppage time winner, and celebration, against Aston Villa in the Women’s Super League to give Chelsea a rare moment of cheer at the end of a traumatic week for the London club.

The Australian’s goal two minutes into stoppage time, taking a long ball down on her chest and beating the advancing keeper with a cool finish, was only matched for excellence by Kerr’s exuberant goal celebration on Sunday.

The Matildas captain wheeled away joyfully, whipped off her shirt and waved it around her head after sealing the 1-0 win.

It brought her the inevitable killjoy booking but prompted laughs and cheers from the fans at Kingsmeadow, who had a moment of welcome distraction amid a troubling few days.

This was Chelsea women’s first home match since owner Roman Abramovich was sanctioned and the UK government effectively took over, leaving a cloud hanging over the club’s future.

The sanctions ensured only season ticket holders or those who’d bought individual match tickets before 10 March were able to attend Sunday’s game.

Kerr eventually made their day after having missed a few chances, being denied by a brilliant save from Hannah Hampton and having an 81st minute goal ruled out for offside.

Yet once again, she proved her mastery when it mattered most after the long kick from goalkeeper Zecira Musovic evaded everyone and landed in her predatory path, allowing her to convert her 11th WSL goal of the season.

It put her back on top of the goalscoring charts, one ahead of Arsenal’s Vivianne Miedema, as she chases a second consecutive Golden Boot award as league top scorer.

Kerr’s winner means champions Chelsea still have the destination of this season’s title in their own hands as they sit five points behind leaders Arsenal while also having two games in hand.

Arsenal eased past Brighton 3-0 in the day’s late game with Kerr’s national teammates Steph Catley and Caitlin Foord in action for the Gunners.

Another on-form Matildas player is Manchester City’s Hayley Raso, whose run and cross set up Caroline Weir’s second-half strike in the 1-0 win at Tottenham.

Spurs’ Australian striker Kyah Simon wasn’t so lucky though, having to come off in the first half with what appeared to be a dislocated finger on her left hand.