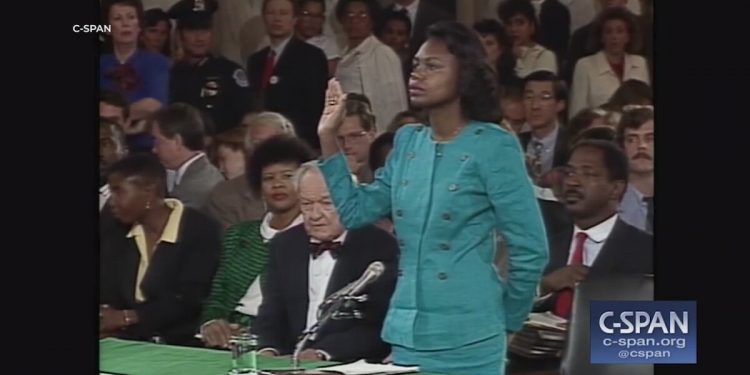 
The questions aimed at Anita Hill were appalling even 30 years ago, a supposedly less-enlightened time.

“Are you a scorned woman?” a member of the Senate Judiciary Committee demanded after Hill accused her former boss, Supreme Court nominee Clarence Thomas, of crude sexual harassment. “Do you have a martyr complex?”

The patronizing and bullying behavior of senators like Alabama’s Howell Heflin, witnessed live on national television, prompted not just anger and revulsion but a political backlash over the seeming cluelessness of the all-male Senate Judiciary Committee.

Just over a year later, in November 1992, five women were elected to the Senate — the most ever at one time — and a record 47 were elected to the House, with California at the vanguard of what came to be called the “Year of the Woman.” The victories of Barbara Boxer and Dianne Feinstein marked the first time in history a state chose two women to represent it in the U.S. Senate.

Do you believe that “babies are racist?” the oleaginous Sen. Ted Cruz asked Ketanji Brown Jackson in one of many exchanges meant not to illicit information but inflame the GOP’s conservative base.

But don’t expect a huge political backlash this time. Things have changed, for good and bad.

“Jackassery,” was how Bill Carrick, a strategist for Feinstein’s 1992 campaign, described last week’s Judiciary Committee spectacle. He was repeating the word used by Sen. Ben Sasse, who showed it was possible to ask probing and substantive questions of Jackson without, in the Nebraska Republican’s words, “mugging for short-term camera opportunities.”

“Being rude in public is a bad thing for anybody and it’s particularly bad for politicians,” said Carrick, who predicted Democrats would repackage the ugliest moments of Jackson’s hearing in campaign advertising, especially for spots targeting women and independent suburban voters.

Still, there are several reasons why the demeaning and disrespectful treatment of Jackson will probably not produce the same sort of political blowback as the Senate’s cruel and cavalier treatment of Hill. (The committee chairman at the time, Joe Biden, reached out decades later to express his “regret for what she endured.” Hill was unmoved.)

One reason is practical.

In Washington state, Democrat Patty Murray was one of the women driven to run for Congress after watching Hill’s torment. Styling herself as “a mom in tennis shoes,” Murray had a full year to capitalize on voters’ outrage and campaign against “the guys in red ties and dark suits” practicing “politics as usual.” She won and has been in the Senate since.

This time, however, the filing deadline has already passed in most states, so for anyone angry enough to seek political office it’s probably too late this year.

Also, there is not the same sense of urgency there was 30 years ago to send more women to Washington. In the last three decades the country has had its first female attorney general; secretary of State — several, in fact; House speaker; presidential nominee and, now, vice president. There are 149 women serving in Congress, more than ever.

More broadly, the hyperactivity of today’s news cycle, the explosion of media outlets and the fleeting attention span of voters have changed the nature of politics and lessened the impact of an event like Jackson’s inquisition.

In 1992, before the Internet came into wide use, there was no Facebook Live, no TikTok, no podcasts, no streaming movies to fragment audiences.

“With the Clarence Thomas hearings, we were all glued to the TV, watching in a way that I don’t really think people watch today,” said Ester Fuchs, a Columbia University political scientist who co-wrote a scholarly paper on the “Year of the Woman.”

And there’s so much going on — a war in Ukraine, galloping inflation, a pandemic, an onstage assault at the Oscars — that Jackson’s hearing already seems a bit like old news.

Finally, and not least, we’ve grown increasingly shock-proof over the years as our politics have become more brutal, more bombastic, more personally nasty. As unsettling and infuriating as appellate judge Jackson’s maltreatment may have been, “It’s not a surprise relative to the post-Donald Trump era of American politics,” Fuchs said.

Or as Charlie Cook, who has been following politics in Washington and handicapping elections nationwide for nearly four decades put it, “It takes a lot more to outrage than it used to. What for gosh sake haven’t we seen?”

There may be one redeeming thing to come of the Senate’s sad display.

Maybe someone running for office will bear in mind the sordid episode and do better than Cruz and Jackson’s other browbeating, attention-grubbing interrogators. Maybe not in November, but soon after and in years to come.

Meantime, if anybody wants to know how to conduct oneself with poise, grace and dignity under terrible pressure, they have Judge Jackson as a role model.

Ranked and Where to Watch