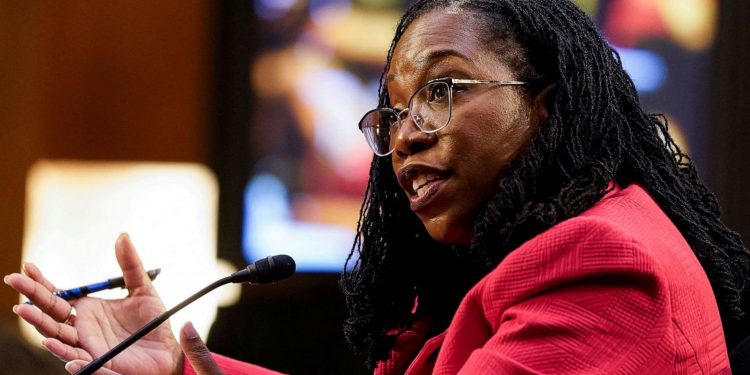 Sen. Tom Cotton, R-Ark., who is considered a presidential hopeful, questioned Jackson on crime, continuing a GOP focus on crime and punishment that some see being more about political calculations than the nominee herself.

He first pushed her to answer if she believes the U.S. needs more or fewer police, calling it a “simple either/or question.”

She responded, “Determination whether there should be more police is a policy decision by another branch of government. It is not something that judges have control over and I will stay in my lane in terms of the kinds of things that are properly in judiciary branch.”

Cotton, appearing frustrated, said to the judge, “OK, you don’t want to address it, we’ll move on.”

Cotton asked more specific questions on crime, including if the average murder sentence — which he said is 17 years — is too long or too short.

Jackson responded, “Senator, these are policy questions … They’re not the kind of things I can opine about.”

When Cotton asked her about rape sentences, Jackson responded, “Rape is not a crime in the federal system that I’m familiar with working with.”

Cotton asked: “In 2020 alone well over 1 million — 1 million — violent crimes went unsolved in America. Do you think we imprison too many violent criminals or not enough?”

Jackson responded, “Senator, it’s important for our rule of law to ensure that people are held accountable who are breaking the law in the ways that you mention and otherwise.”

Cotton then asked her what she thought the families of the victims of unsolved crimes think.

The judge responded, “I know what the families of law enforcement officers think because I’m one of them. I know what crime does to our society. I care deeply about public safety, and as a judge, it’s been my duty, when I was at the trial level … to ensure that people are held accountable for their crimes.”

Jackson, who has repeatedly pushed back on sentencing questions by referring to the role of Congress, did so again.

Cotton also asked about a specific drug case Jackson oversaw in which the defendant received a 20-year sentence and later applied for compassionate release. Cotton accused Jackson of rewriting the law and being sympathetic to a drug kingpin.

Jackson responded, “Respectfully, Senator, I disagree. Congress provided judges, through the compassion release motion mechanism, with the opportunity to review sentences. … In [the defendant] Mr. Young’s case, the question was, with this compassionate release motion, under a circumstance in which Congress had changed the law, was that an extraordinary and compelling circumstance to revisit his sentence? And I made a determination that it was.”

“What I determined under those circumstances is that I would resentence Mr. Young to the penalty that Congress had decided was the appropriate penalty for the conduct that he committed as of the time of his motion,” she said.