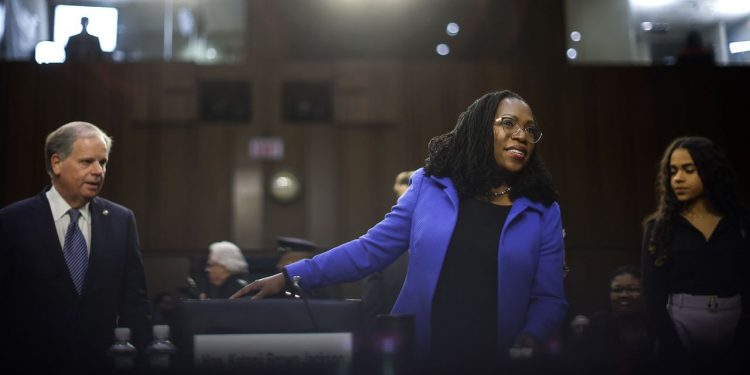 
Ketanji Brown Jackson on Wednesday pledged to step aside from a case involving Harvard University and affirmative action if she’s confirmed to the Supreme Court, as hearings for President Joe Biden’s nominee continued for a third day.

The high court in January said it would decide whether to bar the use of race-conscious admissions in higher education, and agreed to consider challenges to policies at both Harvard and the University of North Carolina.

Jackson serves on Harvard’s Board of Overseers, and her term expires this year. Asked by Texas Sen. Ted Cruz about recusal, Jackson replied to the Republican: “That is my plan, senator.”

Jackson also on Wednesday talked up her younger brother and uncles who did police work and defended her record as a judge, as she faced more assertions from Republican senators that she’s soft on crime.

She told the Senate Judiciary Committee that her uncles “were often around in their uniforms, keeping their weapons away from the kids by putting them up on high shelves.”

“We looked up to them, and we understood through their service what it meant to give back to your community,” Jackson said, following a question from Democratic Sen. Jon Ossoff of Georgia.

She said “it was a very stressful period for us as a family” when her brother followed in their uncles’ footsteps and served for a time as a police officer. The family worried about the dangers he faced on patrol in Baltimore.

“I grew up with family members who put their lives on the line. I understand the need for law enforcement,” Jackson said.

“I also, as a lawyer and a citizen, believe very strongly in our Constitution, and the rights that make us free,” she added. “Although there is crime, we also have a society that ensures that people who have been accused of criminal behavior are treated fairly.”

The third day of Jackson’s confirmation hearing featured more questions for Biden’s pick from the committee’s Democratic and Republican senators. It comes after she was grilled Tuesday about her faith, her past work as a public defender and other topics, following opening statements on Monday.

During Wednesday’s testimony, Jackson sparred with Republican Sen. Lindsey Graham of South Carolina, as he continued a GOP line of questioning that has focused on the length of her prison sentences for people convicted in child-pornography cases.

Graham told Jackson that they have “fundamental differences” on how to deter crime, saying he thinks judges should “lower the boom” in child-porn cases — meaning impose long sentences.

“Every person in all of these charts and documents I sent to jail, because I know how serious this crime is,” Jackson said in response.

“On the other side of their terms of imprisonment, I ensured that they were facing lengthy periods of supervision and restrictions on their computer use, so they could not do this sort of thing again.”

The Fraternal Order of Police offered support for Jackson in a statement last month, with the group saying she would “treat issues related to law enforcement fairly and justly.”

Jackson is expected to win Senate confirmation, as Democrats control the 50-50 chamber because Vice President Kamala Harris can cast tie-breaking votes. The judge could pick up some GOP support, given that three Republican senators backed her last year when she was elevated to the U.S. Court of Appeals for the D.C. Circuit. But Graham was among those three GOP votes in 2021, and he hasn’t sounded supportive this week.

The South Carolina lawmaker and other Republicans have aimed to score political points during Jackson’s confirmation hearing, as the party looks ahead to possible wins in this year’s midterm elections.