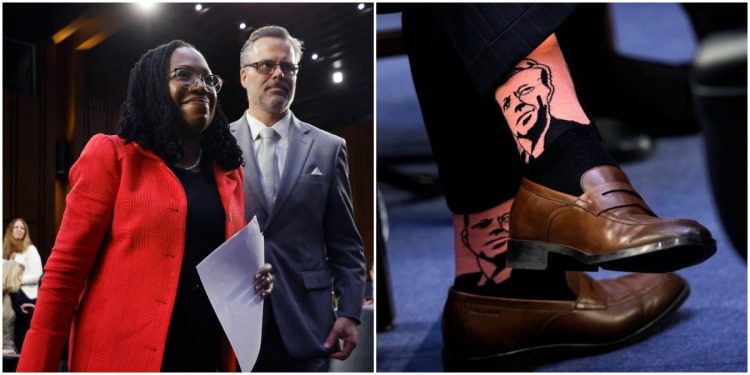 
Judge Ketanji Brown Jackson’s Supreme Court confirmation hearings have been filled with tense moments of questioning as well as powerful statements about the historic nature of her nomination. If confirmed, she will be the first Black woman to serve on the nation’s highest court.

Jackson’s husband, Dr. Patrick Jackson, has been sitting behind her through it all, wiping away tears as she told the Senate Judiciary Committee in her opening statement that “without him by my side from the very beginning of this incredible professional journey, none of this would have been possible.”

Jackson’s husband has also been spotted wearing statement socks with the likenesses of past presidents and founding fathers throughout the weeklong hearings.

On Tuesday, he wore green socks with the likeness of founding father Benjamin Franklin.

Senate Democratic leaders have said they plan to move quickly to advance Jackson’s nomination, who only needs a simple-majority vote to be confirmed to the court. If no Republicans support Jackson, then all 50 Democrats must be on board so that Vice President Kamala Harris can cast the tie-breaking vote.

How to Improve Your Financial Literacy

How to Improve Your Financial Literacy