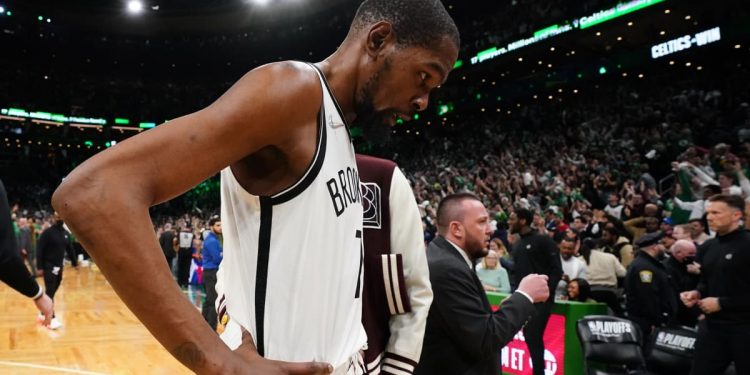 Celtics forward Jayson Tatum sent TD Garden into a frenzy and dashed the Nets hopes of stealing the series opener on the road when he made a game-winning layup as time expired on Sunday.

The Celtics narrowly pulled out a 115–114 victory and took a 1–0 lead in the first round Eastern Conference series thanks to the All-Star’s heroics. However, the game-winning play was also seemingly made possible by a major defensive lapse from Kevin Durant.

Before the chaos broke out on the final possession, the Nets star was matched up with Tatum at the top of the arc. However, when Marcus Smart began driving to the lane, Durant stood frozen in place, watching the Celtics point guard, which allowed Tatum to slip in behind him.

From there, the 6’8″ Tatum easily spun by the much smaller Kyrie Irving to drop in the game-winner.

As the video shows, Durant remained just a step in from the three-point line, in the vicinity of Boston’s Jaylen Brown as Tatum made his cut to the basket. By the time he realized what had occurred, the final buzzer had already sounded, signaling a Celtics victory.

The final possession was the end of a difficult evening for Durant. On offense, the Nets star managed to score 23 points, but shot just 9-of-24 and coughed up six turnovers.

Down 1–0 in the series, Durant and No. 7 Brooklyn will look to bounce back in Game 2 in Boston on Wednesday night.

For more Boston Celtics coverage, go to Inside The Celtics