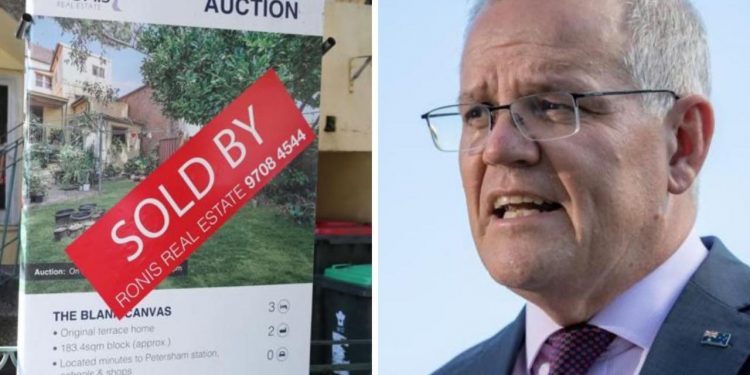 The PM has said a significant change to one of the Coalition’s flagship policies should help thousands save for a new home – but critics have said it’s lacking.

Prime Minister Scott Morrison has announced the price caps for homes available under the scheme will increase, expanding the number of people who are eligible.

The scheme allows people to purchase homes with a deposit of just 5 per cent, with the government guaranteeing the other 15 per cent.

“We’re building a stronger future for Australians by making home ownership easier, by making more properties eligible for the scheme and expanding it to 50,000 places each year,” Mr Morrison said.

The 50,000 places were announced in the federal budget earlier this year.

“People are cutting years off the time they’d need to save a deposit for a home because of this program. Now even more Australians can get into a home sooner.

“Saving to buy a house has always been hard work and we know as prices have increased, it’s getting harder. That’s why these higher price caps take into account the 50,000 place per year expansion of the Home Guarantee Scheme, particularly in regional areas, where the new Regional Home Guarantee is open to non-first homebuyers.”

The government estimates its guarantee scheme has helped about 60,000 Australians buy their own homes so far. It hopes the more generous price caps will help ease supply constraints in regional areas and accommodate larger families.

The price caps – i.e. the highest value of a home you can purchase while still benefiting from the scheme – vary from city to city. There are also different caps for regional areas in each state.

To qualify for the scheme, borrowers still need to meet the usual loan and repayment assessments from their financial institutions. The new caps come into effect from July 1.

In the budget, delivered in late March, the government committed an extra $8.6 million to more than double the number of places available under the guarantee scheme to a total of 50,000 per year. That higher total will apply for three years before fading to $35,000 in 2025.

The Regional Home Guarantee is not starting until October 1, three months later than the tweaks to the other two elements of the program.

In his budget night speech, Treasurer Josh Frydenberg described home ownership as “fundamental to the Coalition”.

“Helping more Australians to own a home is part of our plan for a stronger future.”

To illustrate its effectiveness, the budget papers pointed to the case study of a couple currently renting in Wagga Wagga, NSW. The pair wanted to buy their “perfect house” for $400,000, but were struggling to save the required deposit of $80,000 while also paying rent.

The guarantee would allow them to instead buy the home with a deposit of $20,000, a quarter of the size.

The government also announced an expansion to the scope of the National Housing Finance and Investment Corporation (NHFIC), which has so far supported about 15,000 affordable homes by giving low-cost loans to community housing providers.

The NHFIC’s liability cap will rise to $5.5 billion – a $2 billion increase – and that measure is forecast to support about 10,000 more affordable dwellings for vulnerable Australians.

Data from Swinburne University of Technology’s Centre for Urban Transitions recently showed a dearth of social and affordable housing was costing Australian communities tens of millions of dollars per year. Dr Andy Nygaard, an associate professor at the university, found the cost was set to grow from $676.5 million in foregone social and economic benefits each year to $1.286 billion by 2036.

The thrust of his analysis was that a lack of affordable housing doesn’t just hurt people who can’t buy or rent homes – it harms society as a whole.

Another example: if a victim of domestic violence has nowhere to go, he or she is more likely to remain trapped, unable to escape an abuser. That adds to the burden on the justice system.

“The social and economic problems associated with our affordable housing shortage will only increase over the next decade if we keep doing what we have been doing – very little.”

The morning after the budget, Mr Morrison was asked directly why it included no more support for renters.

“This is about Australians getting into homes,” he answered, adding that “the people buying homes are renters”.

“The best way to support people renting a house is to help them buy a house,” he said.

Dr Cassandra Goldie, CEO of the Australian Council of Social Service, said that strategy was “completely out of touch with the reality for people on low and modest incomes”.

She said many people renting had barely any savings, and certainly not enough to afford even a 5 per cent home deposit.

“Renters should not be second-class citizens in Australia. We’ve got to make renting a decent, respectable, long-term housing option for people,” Dr Goldie said.

“We’ve got people who are facing homelessness and hunger because they’re trying to keep a roof over their head. And they are so far away from buying a home at the moment.”