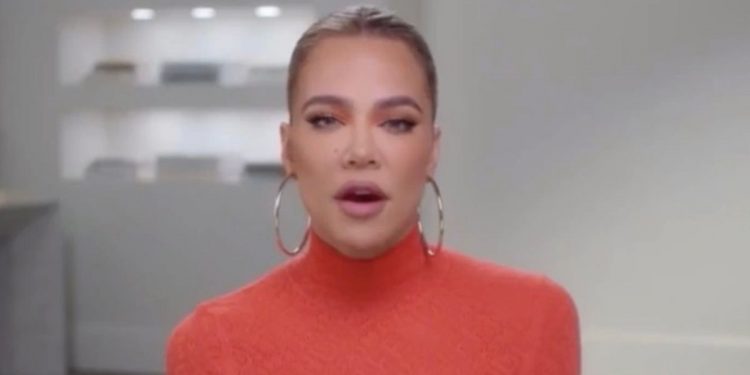 
Khloe Kardashian made fun of her own love life after a picture of her at Kourtney Kardashian and Travis Barker’s wedding went viral.

The 37-year-old reality star attended the lavish wedding in Portofino, Italy, solo, whereas many brought along their other halves.

A fan had shared a picture of Machine Gun Kelly and fiancée Megan Fox cosying up to each other for a photo.

However, in the background, Khloe can be seen standing alone enjoying her large glass of white wine.

“My love life summed up in one photo,” the fan tweeted.

The star’s last romance has been an on-again-off-again relationship with baby daddy Tristan Thompson – with whom she shares daughter True Thompson.

On the bright side, the only other Kardashian-Jenner to bring a date was Kendall Jenner, who brought Devin Booker.

Khloe and Tristan welcomed True in 2018, with the two splitting after she discovered he had cheated on her while she was pregnant.

They reconciled, but it was short-lived as they split when it was reported that Tristan had fathered another child with a personal trainer.

His son Theo was born in December last year.

Recently, an episode of The Kardashians showed Khloe gushing over her man in scenes filmed before she discovered he fathered a love child.

But Tristan hit back: “More like you’re never leaving me”, which left Khloe looking less-than-impressed with the jibe as she replied: “Oh, okay”.

The reality star received the news that the basketball player, 31, had fathered a child with fitness model Maralee Nichols while cameras were rolling months ago.

Khloe is reported to have found out about the paternity drama from her sister Kim Kardashian on camera.

Danielle King – an executive producer on the Kardashians – told US Weekly there had been a crew with Khloé to film something else that day when the drama unfolded.

Only a fifth of Brits...

Paul Simon, 80, tucks into an ice cream as he and wife Edie Brickell, 56, enjoy Portofino holiday

Final Fantasy 16 trailer was delayed due to war in Ukraine

Gemma Collins has shed so...

36 Back to School Poems for Every Student