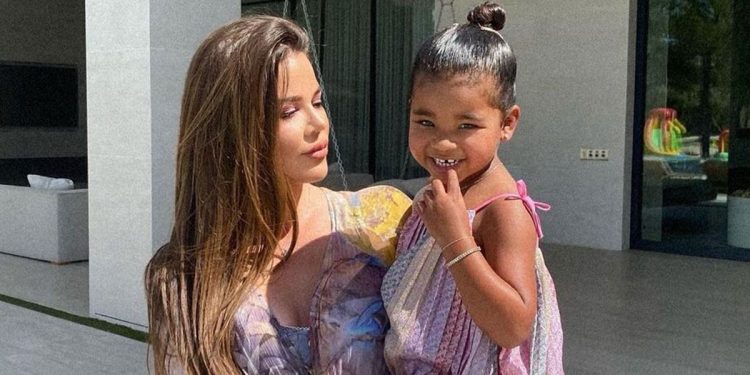 
Khloe Kardashian was slammed for sharing a picture of her three-year-old daughter True wearing a full-face of make-up.

The Keeping Up With The Kardashians star, who shares True with baby daddy Tristan Thompson, and her daughter were having a bit of fun with some eyeshadow and lipstick but fans were less than impressed.

She shared a snap of True pouting for the camera and rocking glittery purple eyeshadow and bright red lipstick.

“Good Morning,” Khloe captioned the post along with a kiss emoji.

Fans were concerned as to why the 37-year-old allowed her toddler to play with make-up but most were simply loving True’s adorable look.

“Not cute let her be a baby,” one user said while another disappointed added: “Good thing Kanye isn’t the dad, he’d be trippin.”

Another fan wrote: “You put all that makeup on a 3 year old.”

“Hallo are you people stupid she is a CHILD!!!” one said while another follower posted: “Mama Khloe!! What did you let Ms.True do to that Beautiful Face.”

Many people, including her pals, thought True looked precious and left a few lovely messages.

“Ok baby!” pal Malika Haqq wrote while Simon Huck wrote: “Such a mood” along with a laughing emoji.

Celebrity make-up artist Mary Phillips added: “Good morning Beautiful!!!!! can true do my make up later?!” while one fan commented: “Omg I just love her”.

The Kardashians regularly receive backlash on what they share on social media about their children.

Kim Kardashian was previously criticised, both by fans and ex-husband Kanye West, for letting daughter North play with make-up.

Mum Khloe was recently slammed when after she shared a picture of True with a £3,000 doughnut-shaped bag.

She had shared the snap of True looking adorable sporting a pink sequinned skirt, cream jumper and matching Nike trainers.

A crystal-covered Judith Leiber bag, which retails for £3,100, was next to her.

Many fans flocked to the comments section saying how sweet little True looked in her matching outfit.

However, Khloe was criticised earlier this year after flogging her daughter’s old clothes on kardashiankloset.com.

Lesson Learned: What Goes Around Comes Around