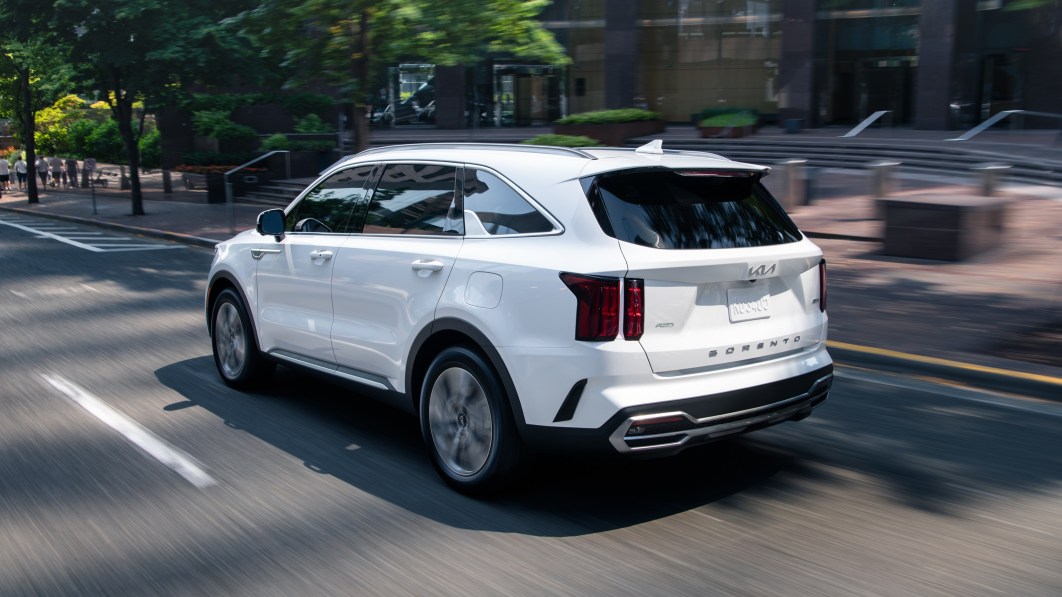 Kia has published pricing information for the plug-in hybrid version of the new 2022 Sorento. It costs more than the non-electrified and hybrid models, but some buyers will be able to claim local and federal tax incentives.

Already on its way to dealers across the nation, the Sorento PHEV is available in two trim levels named SX and SX-Prestige (SX-P). Pricing is pegged at $46,165 and $49,065, respectively, including a mandatory $1,175 destination charge. Kia points out that its crossover may be eligible for a $6,587 federal tax credit plus local incentives.

To add context, the standard Sorento starts at $30,665 with front-wheel-drive and $35,465 with all-wheel-drive. The catch is that the base PHEV corresponds to an upmarket standard model; comparing apples to apples, the non-hybrid version of the Sorento SX costs $39,365 while the SX-P carries a base price of $42,265. Viewed in this light, the difference between a non-hybrid and a plug-in SX is $9,700. Shop for an SX-P and you’ll pay $6,800 more. Again, all this before incentives.

Power for the 261-horsepower PHEV comes from a 1.6-liter turbocharged four-cylinder that works with a 90-horsepower electric motor linked to a 13.8-kilowatt-hour lithium-ion battery pack. The drivetrain boasts a 32-mile electric range, according to the EPA, and a full tank and a full charge give the Sorento a 460-mile driving range.

'RHONY' Reunion Canceled, Cast 'Beyond Frustrated' By It All, Source Says

DETROIT — General Motors is more than halfway through shipping newly-assembled pickups that it had parked due to a...

A Napleton Automotive Group executive accused of sexual assault by a co-worker in 2018 was sentenced Wednesday in Florida...

Subaru declared October 22 “National Make A Dog’s Day” a couple of years ago, because of course it did....

BEVs not for everyone – Toyota

Many people are passionate about climate change, but not everybody should drive a battery electric vehicle as a means...

In the third quarter of 2021, the market share of electrically-chargeable cars further expanded in the EU at the...

TSMC said in a statement to Reuters it is preparing and will respond to the U.S. request for information....

'RHONY' Reunion Canceled, Cast 'Beyond Frustrated' By It All, Source Says

Sarah Paulson’s ‘the Killer Is Escaping’ Line Takes Over TikTok

This Chemical Found in Groceries Kills More Than 90000 People Every Year, New Study Finds — Eat This Not That – Eat This, Not That