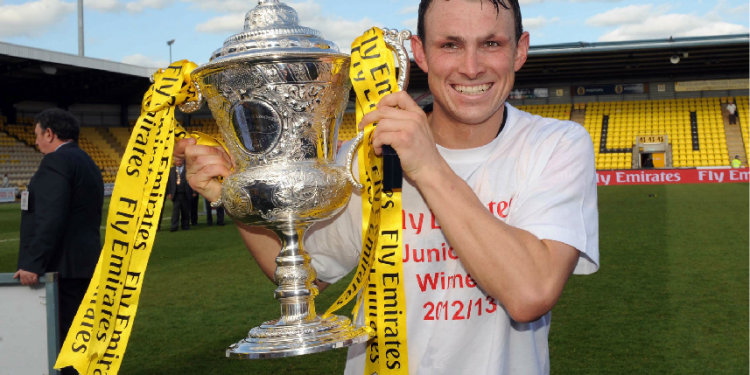 Kilwinning Rangers have announced a new manager after Chris Strain was relieved of his duties earlier this month.

Current Broomhill Football Club manager David Gormley has been confirmed as the new man in charge following an announcement this morning, April 25.

The ex-Auchinleck Talbot striker has previous experience at this level, having managed Rossvale before moving to the Lowland League club.

Gormley had already announced that he would be departing Broomhill at the end of the season due to “circumstances outwith his control”.

He will take up the new role at Kilwinning following the conclusion of this season, signing a two-year contract with the Buffs.

People won’t realise how well Gormz did this year under the circumstances – taking over as the season started with less than a full XI signed up, changing the squad as time went on, steering us to relative comfort in the end.

Gormley spent his career playing in the lower leagues of Scottish football, as well as the former junior football ranks.

Most notably, he enjoyed a fruitful three years at Auchinleck Talbot, before moving onto Clyde in 2015.

He finished his playing career with Pollok, before stepping into the managerial hotseat for the first time with Rossvale in 2019.

NEW MANAGER: The club are delighted to confirm the appointment of David Gormley as our new manager.

Speaking following his announcement, Gormley said: “I am absolutely delighted to be named as manager of Kilwinning Rangers Football Club and can’t wait to get started.

“The Buffs have been a large part of the community for over a hundred years and the tremendous work that has been carried out in the last few years has laid the foundations for the club to continue to grow.

“The club have committed people with a vision to further develop links within its community and develop player pathways to take the club forward.

“My work starts now to build a strong squad and have a coaching staff in place in preparation for the new season.

“Thanks to Kilwinning Rangers for giving me this opportunity. I look forward to having your support as I will work hard to bring success to the club.”

Kilwinning Rangers currently sit fifth in the West of Scotland Football League Premiership, however, can no longer be promoted, nor relegated.

The incoming boss will be hoping to build on this solid season next year, and begin to push for promotion into the Lowland League with his new side.

Epic Games might have revealed Uncharted: Legacy of Thieves is coming to PC this June

Epic Games might have revealed Uncharted: Legacy of Thieves is coming to PC this June