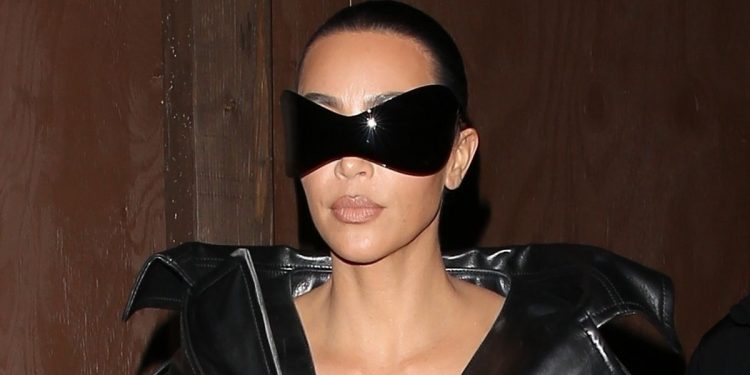 
Kim Kardashian’s wardrobe is once again the talk of the town as she hit the streets on Saturday night in an all-in-black “Matrix” style outfit.

The Keeping Up With The Kardashians star, 41, was attending the David Kordansky Gallery for a show when she rocked up wearing a floor-length black trench coat and huge bug-like black sunglasses.

The coat had a large collar and was low-cut showing off ample cleavage while being tied tightly around her small waistline.

She topped the look off with black heels and her hair tightly tied back in a bun while she walked guided by her small entourage.

Kim linked arms with Shelli Azoff, who is the wife of music mogul Irving Azoff who is Kim’s godfather.

Fans had a mixed response to her look online with some calling her an “icon”.

Others claimed her estranged husband Kanye West, 44, was responsible for the look, saying he is the one who “made her a fashion icon”.

And others were simply not struck on the look at all.

One Twitter user slammed the “Matrix” appearance, writing: “This matrix look is like 20 years old and immediately disqualifying.”

Another agreed, penning: “It’s like the clown world version of the matrix.”

A third likened her to another film and said: “I swear she looks like Batman where is Robin.”

The appearance comes at a time ex-hubby Ye, as he is now legally known, was making fashion headlines of his own.

The Gold Digger rapper and his new belle Julia Fox donned the double denim look as they rocked up on the red carpet on Sunday in a seemingly less than subtle homage to ’00s power couple Justin Timberlake and Britney Spears.

He took his trousers into his knee-high black motorbike boots – a fashion item that is new a regular with the star.

He accessorised with a simple pair of black sunglasses, black gloves and his trademark scowl while Julia’s double denim take had her in a midriff baring ensemble.

In what could be a tribute to Madonna’s iconic style, Julia’s cropped denim jacket had embroidered cones over each breast.

Her baggy and low-slung jeans appeared to have a pair of stiletto boots sewn in to the bottom.

Julia had to recently shut down claims that she was only dating the music superstar for his money and to gain attention.

It’s Time To Face Some Difficult Truths About Teaching –