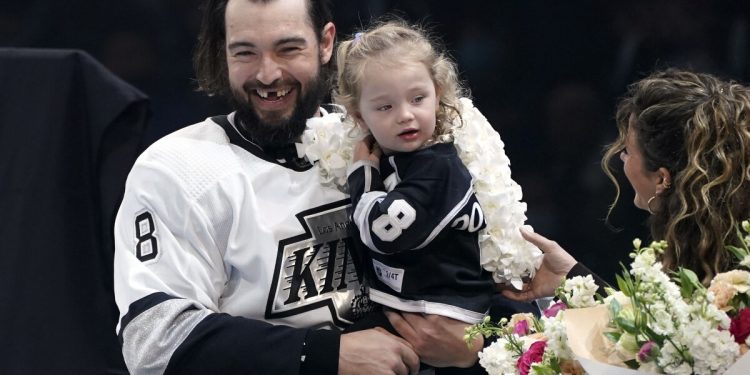 
For a brief moment before the start of Tuesday night’s game, Drew Doughty allowed himself to indulge in nostalgic celebration.

Though more than two weeks had passed since the Kings defenseman eclipsed his career 1,000-game milestone during a road trip last month, Tuesday was the first time the team had played at home since resuming its season after a 13-day layoff around the All-Star break.

The club honored the 32-year-old assistant captain with a pregame center-ice ceremony, serenading Doughty with an address from radio broadcaster Nick Nickson (“The only thing missing from his Hall of Fame resume,” Nickson quipped, “are his two front teeth”), a video board tribute featuring current and former teammates, and a custom painting the club had commissioned from an artist in Doughty’s hometown in Canada.

When it was finally Doughty’s turn to speak, his address was predictably succinct.

He thanked his family, coaches and teammates — and, jokingly, even the visiting Edmonton Oilers as they waited on their bench during the 10-minute ceremony. He praised the fans, who bellowed “Dreeeeeeewwwwww!” in a rapturous response. And then, he finished his speech with a simple wish, turning his attention back to the urgent quest for a playoff berth.

Despite being deadlocked with less than five minutes to play in the game that followed, the Kings failed to follow through, instead giving up three late tallies (two were empty-netters) in a 5-2 loss that snapped their six-game point streak.

The result helped the Oilers, winners of three in a row since making a coaching change last week, leapfrog the Kings in the standings. Both clubs have 55 points, but Edmonton sits in third place in the Pacific Division because they’ve played one fewer game, dropping the Kings into the last wild card place in a crowded Western Conference playoff picture.

The finish line, of course, is still in the distance. With their two-week midseason break complete, Tuesday began a run of 35 games in 73 days to close the Kings’ season, as they find themselves in a legitimate postseason hunt for the first time in almost a half-decade.

By the time he met with reporters postgame, Doughty’s focus was trained squarely on the task at hand.

If the pregame ceremony was a sentimental reminder of all he and his fellow veteran teammates have accomplished in their careers together — memories of the club’s two Stanley Cups featured prominently in the festivities — then the 60 minutes that followed offered a staunch reality check about the stakes lying ahead.

“We got to fix it quick,” Doughty said. “That was a big game. I really thought we were gonna win it tonight. And we didn’t.”

Given the circumstances, the Kings’ performance wasn’t all bad.

The club, after all, was shaking off the rust that had set in physically during the layoff. And even after being punished for what coach Todd McLellan described as a several mental mistakes — including a neutral zone turnover, a failed breakout and a defensive-zone coverage breakdown that each led to Oiler goals — the Kings came close several times in the closing minutes to scoring a game-tying goal that could have at least pushed their point streak to seven games, dating back to an impressive 4-0-2 road trip prior to the All-Star break.

“Physically, [we were] actually maybe better than I thought it would be, but mentally not good enough,” McLellan said.

Echoed Doughty: “We had some good practices and I thought we were prepared, we just didn’t have our stuff.”

This time of the year, however, the margin for error is only getting thinner, ratcheting up the pressure on a Kings team trying to snap a three-year playoff drought.

On Tuesday morning, winger Viktor Arvidsson, one of several veteran additions the team made in the offseason to bolster a roster that had previously lacked enough depth and experience beyond its long-time stars, spoke to that reality, hoping that the long break could at least help the Kings “get our bodies back in order to be able to push for the playoffs now.”

McLellan was asked about the postseason more directly, maintaining he is “confident this team can make the playoffs, or push for a position in the playoffs,” regardless of what moves they might make ahead of next month’s trade deadline.

And then there was the dichotomy surrounding Doughty. As the pregame ceremony highlighted, he has accomplished almost all one can in an NHL career: one Norris Trophy, two Stanley Cups, four All-Star selections, and more points than any other defenseman in club history.

But after enduring the club’s decline as a contender and struggles through a recent rebuild, his desperation to simply get back into the playoffs has been renewed again.

The prefab homes still standing in Moseley: How temporary ‘tin can homes’ became a local landmark