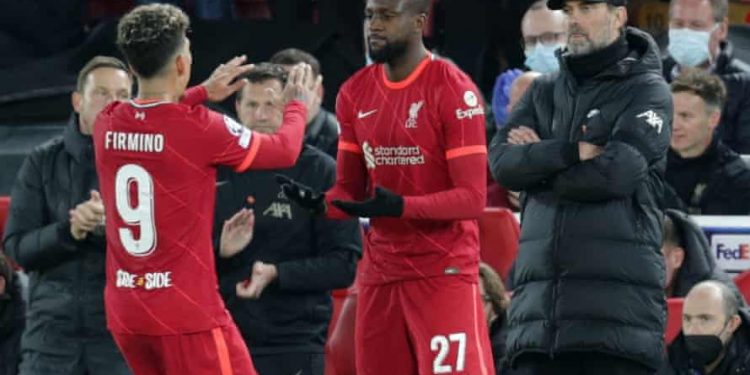 
The dream is alive, the dream is still tantalisingly feasible yet agonisingly remote. Liverpool are in a third Champions League semi-final under Jürgen Klopp and if a fantasy for a plethora of reasons but mainly its sheer, basic difficulty, a historic quadruple remains on for the German’s band that blends artists and artisans.

On Wednesday it was the turn of the latter coterie. Well, kind of. Klopp rested seven of the star turns who started last week’s 3-1 first leg win at Benfica. There was no Virgil van Dijk, Sadio Mané, Mohamed Salah, Trent Alexander-Arnold, Andy Robertson, Thiago Alcântara or Fabinho. And this after their manager had said: “You can never feel entitled. Clubs and teams who are planning the next stage before a particular round is complete are inviting problems.”

This was the big news before kick-off. It wouldn’t backfire would it? Surely not. Especially when Klopp could draft in Roberto Firmino, Joël Matip, Jordan Henderson, James Milner, and Diogo Jota along with Kostas Tsimikas and Joe Gomez. Yet there was a certain rustiness initially. The awkward stutter of gears that usually mesh smoothly. By way of example: a Jota swoop into the area ended with his backside hitting turf; a Milner free-kick lollipopped into the wall; Firmino’s angled tap back to Tsimikas proved geometrically awry.

But, then, Klopp’s pack-shuffle began to cast him as a sagacious seer via an opener that was close to a carbon of Liverpool’s first in Portugal. A corner, from the left? Check. A downward header at the far post? Check. From Ibrahima Konaté? Check a third time. Seventeen minutes at Estádio Da Luz, 21 here at Anfield. The only difference was the impressive Tsimikas delivered the dead ball, not Robertson.

This was 4-1 and had the Kop regaling their beloved red men with “We shall not be moved”. But they were. Milner inadvertently slashed the ball to Gonçalo Ramos (keeping him onside) and the No 88 arrowed the ball beyond Alisson and in.

This was against the momentum, with the possession stats showing a 67.5% share to Liverpool. Only complacency might cause their downfall but there appeared zero chance of this as Benfica took the haymaker of Firmino’s strike on 56 minutes which was followed immediately by Klopp administering the follow-up winding blows of introducing Salah, Fabinho and Thiago.

Firmino added another, Klopp punched the air, then repeated his substitution trick: this time the effervescent Luis Díaz was taken off and Mané was on. Anfield was in fine voice. “Mo Salah, Mo Salah” came the chants from around a venue well versed in European nights like this one.

This was tie over – apparently, despite Roman Yaremchuk snatching a second for the visitors a few minutes later. And now came a late twist, a quickening of home heart-rates. Darwin Núñez scored again for Benfica to make it 3-3 on the night, pulling the aggregate back to 6-4. That was bookended by two other offside strikes before the final whistle sounded and Liverpool were through having never endured any real peril.

Next up will be Villarreal. Before then, Klopp and his men fly down to Wembley to face off against Manchester City for a second time in seven days as they continue the (surely impossible, no?) quest of pulling off a clean sweep of trophies. In the Premier League Liverpool trail City by a point with seven matches left each and they have secured the Carabao Cup. In this competition, one serious threat in Bayern Munich went out on Tuesday, leaving Pep Guardiola’s team, Real Madrid and Villarreal.

In Klopp’s first season Liverpool beat Villarreal in the Europa League last four and lost the final to a Sevilla managed by Villarreal’s now No 1, Unai Emery, who plotted Bayern’s downfall. He and Liverpool will be wary.

Villarreal claimed last year’s Europa League and Emery is a continental cup specialist: he has two other winner’s medals in the second-tier competition (with Sevilla) but to take on a seventh-placed La Liga side who stand 26 points off the leaders, Real, is about as good as it gets in any push to reach a European Cup final.

This had been a lovely April evening that showed, at the start, cloud-dappled skies and a silvery moon. By the end it was dark and clear and Liverpool and their fans could continue to fantasise about doing what no domestic team ever have.

It probably will not occur but the excitement is that it may – only may – just happen.

‘The Kardashians’ Recap: Kim Wanted Kanye to Be Her ‘SNL’ Musical Guest and More Premiere Bombshells