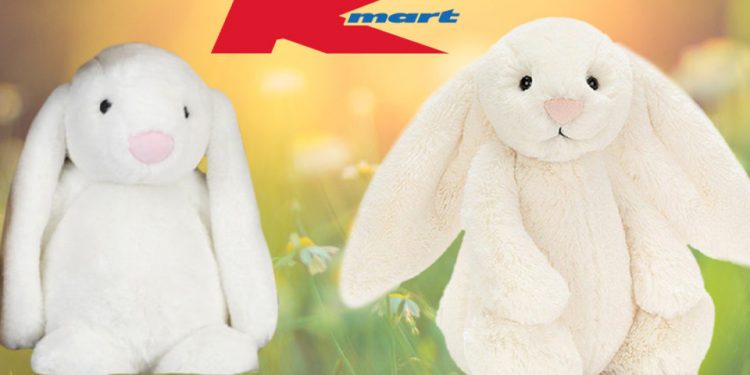 
Kmart is being sued in the federal court over claims it has been selling bootleg stuffed animals.

UK-based toy manufacturer Jellycat has accused the department store of profiting from a range of plushies that “reproduce” their popular “Jellycat bashful bunny”, which is sold in Australia and around the world.

Federal court filings seen by The New Daily claim Kmart and its supplier, Headstart International, have “refused to comply” with demands to stop selling the toys, which Jellycat claims are being “passed off” as its own.

Kmart, which continues to sell the toys online, calls them “resoftables”.

But Jellycat alleges Kmart’s customers have been misled or deceived into believing Kmart’s plushies are genuine and reputable Jellycat toys because they have similar features.

Jellycat wants the federal court to issue an injunction forcing Kmart to stop selling the toys and to pay damages to compensate the company.

“Jellycat’s reputation and goodwill in the shape and features of the Jellycat bashful bunny and Jellycat’s business generally have been injured,” lawyers for the UK-based company told the Federal Court.

Retailers like David Jones charge $32 for branded Jellycat bunnies in Australia, while Kmart’s plushies cost just $15 – less than half the price.

Kmart has found itself in legal trouble in the past for selling allegedly bootleg products on the cheap. The popular discount retailer was also dragged into court in 2018 over claims it sold bootleg cargo pants.

Intellectual property lawyer Nicole Murdoch said the case rests on the idea that Kmart has passed off its resoftable bunnies as Jellycat ones.

She said Jellycat will try to convince the court that it has a reputation with Australian consumers for selling its toys and that Kmart is trying to pass off its resoftables range as Jellycat products.

“Their bunny has exaggerated features, it has overly long ears and a certain look on its face,” Ms Murdoch, partner at EagleGate lawyers, said.

Court documents claim Jellycat has sold 670,000 bunnies in Australia through its exclusive distributor since 2010.

The company claims these sales amount to $16 million, which could play into whatever damages are awarded if the company wins its case.

But Jellycat may struggle to convince the court that customers have been misled into thinking Kmart’s stuffed toys are Jellycat products.

“This type of claim very much depends on the reputation of the original bunny,” Ms Murdoch said.

“If they can’t establish a reputation in it, then how could someone be misled into a belief that they’re buying the original [Jellycat] bunny?”

One potential issue for Jellycat is that Kmart has not adopted its brand name in its sale of the resoftables range, which means it is relying on the idea that customers recognise the exaggerated features of Jellycat bunnies.

How do online casinos ensure the safety of their users?