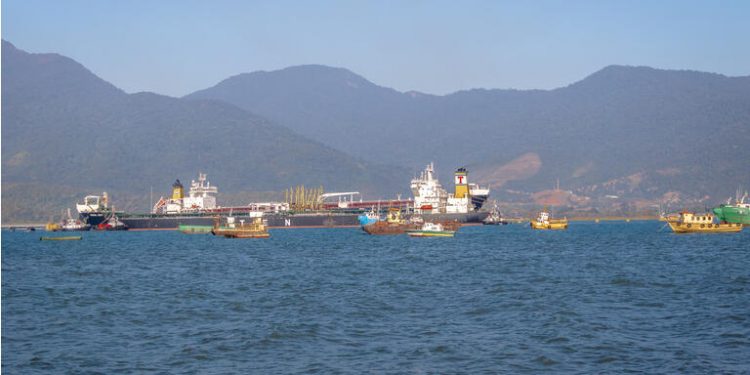 
Looking for steady niche high yield income? You may want to climb aboard KNOT Offshore Partners LP (NYSE:BUTTON), a leader in the niche industry of offshore shuttle tankers.

This tiny industry is less than 1% of the world’s total shipping fleet.

It may be a tiny industry, but shuttle tankers perform a vital service for offshore oil producers, who utilize them to get their product to the mainland. Shuttle tankers service a growing proportion of all offshore production, recently surpassing 90% in Brazil. KNOP’s management estimates that there are ~12 customers and ~3 suppliers in this sub-industry.

These are specialized vessels that take 2.5-3 years to build, which helps support KNOP’s re-contracting efforts, as its customers often utilize the extension options on these vessels.

These vessels have a lifespan of ~25 years. KNOP’s fleet utilization has typically been steady and strong, with an average of ~99.5% since KNOP’s 2013 IPO, which has resulted in steady revenues.

Recently, however, KNOP’s fleet utilization has been lower, due to several off-hires – in Q3 ’21 the fleet operated with 91.9% utilization for scheduled operations.

KNOP has 17 vessels in its fleet, with an average age of 7.8 years. The main challenge facing management in 2022 is that there are several vessels with charters ending in 2022.

The average remaining charter period is ~2 years. KNOP’s customers have options to extend these charters by a further 2.7 years on average.

This has prompted some debate about the possibility of a future dividend cut, if KNOP has to recharter these vessels at much lower rates:

The Bodil’s charter extension starts in Q2 2022, but doesn’t have a new charter until 2024. However, parent Knutsen NYK is employing the Bodil under a rolling time charter contract, with the vessel being used in Knutsen NYK’s North Sea business. An extension to the charter has been agreed for a further 3 months on the same commercial terms, with 3 further one-month extensions of the charter as option, potentially taking the vessel’s fixed employment to June 2022.

The Tordis Knutsen started its 1st planned 5-year special survey drydocking in mid-December 2021, with off-hire expected to be from for ~ 60-days.

KNOP has five other vessels undertaking scheduled drydocks in 2022.

The Hilda’s charter runs through Q3 ’22, with a 3-year extension available to ENI, its charterer.

The Brazil and the Anna both have charters ending in 2022, with 6-year extensions available:

KNOP’s parent Knutsen NYK has been supportive through the years – it retains at least 25% of the limited partner interest in KNOP through both direct investment and ownership of the general partner. This company pioneered the shuttle tanker business.

Knutsen has 6 vessels available for dropdown to KNOP, all with multi-year contracts. KNOP’s last dropdown was in 2020, when it acquired the Tove Knutsen for $117.8M, less $93.1M of outstanding indebtedness. It was financed on a non-dilutive basis using cash on hand and borrowings under KNOP’s existing revolving credit facility.

Management is reviewing potential dropdowns in 2022. With investors still hankering for preferred high yield stocks, one way to help finance a dropdown would be to issue a new preferred series at a much lower rate than the common units’ current 12%-plus yield. Of course, refinancing rates would be even lower than that. Management should be able to refinance the 2023 debt maturity at a lower rate.

Management sees ongoing demand growth for shuttle tankers in Brazil, the UK and Norway, its areas of operation, from a combo of producing fields, fields under development, and non-sanctioned fields.

Another support is that the non-sanctioned fields should have a breakeven below ~$40/barrel, with a majority having a breakeven of just over $35/bbl:

Q3 ’21 revenues were slightly lower than the second quarter due to several vessels experiencing temporary technical issues or transitioning between charters. Net Income went from a -$10.9M loss in Q2 ’21, to a $13.5M gain, due to a $29.4M non-cash write-down in Q2 ’21 on the Windsor Knutsen vessel, which had to be converted to a shuttle tanker. Without the writedown, Q2 ’21 Net Income would’ve been ~$19M.

In the Q3 ’21 presentation, KNOP’s management reiterated its intention to maintain the $.52 quarterly distribution. They made good on this priority this week by announcing another $.52 distribution, which goes ex-dividend on 1/27/22.

Distribution coverage has averaged 1.28X over the past 4 quarters, but the 1.03X coverage has made investors a bit jittery, and, along with “cut” speculation, pushed KNOP’s price/unit from ~$20.00 to below $13.00 from late October into late December.

Management commented on the Q3 ’21 call, that, “Although this ratio is lower than we have traditionally reported it remains at one despite several vessels experiencing temporary technical issues and others transitioning between charters.”

KNOP has elected to be treated as a C-Corporation for tax purposes – investors receive the standard 1099 form and not a K-1 form. There was a 66%/34% split between Qualified and Non-Dividend Distributions in 2020.

KNOP’s ROA, ROE and EBITDA Margin are down somewhat from their pre-pandemic figures, while its debt leverage is stable, and its Interest Coverage has much improved.

Management closed a $345 million refinancing in September, via a new senior secured credit facility for the Tordis, Vigdis, Lena, Anna and the Brazil Knutsen. The credit facility bears interest at a rate per annum equal to LIBOR plus a margin of 2.05%. With that done, KNOP has no further refinancings due until the third quarter of 2023.

KNOP also entered into a sales agreement with B. Riley Securities for an ATM equity program, whereby the partnership may offer and sell up to $100M of common units from time-to-time.

At the currently lower price level, KNOP looks undervalued on a Price/DCF basis, in addition to having a much higher yield.

With offshore oilfield volume expected to bounce back and grow vs. pre-pandemic levels, KNOP’s management should be able to recharter its vessels. The big question remains, though, of how high a level of charter rates they’ll receive. Q3 ’21 looked to be an outlier in terms of the technical issues with its vessels, but it would appear that Q4 may have looked better, with management maintaining the $.52 payout.

“As we move into 2022 and beyond, the key things we will be looking to do are to secure employment for our vessels that are currently open in 2022 and 2023, maintain high operational utilization, plan, prepare and execute the drydocking at the Tordis Knutsen and other vessels, assess attractive growth capital options for future accretive acquisitions (that) may be in 2022, prepare for the expected growth in the shuttle tanker demand in Brazil and the North Sea, and continue ongoing close dialogue with our customers concerning operations and chartering and re- chartering to ensure we can respond flexibly to demand opportunities as they arise.” (Q3 call)

All tables by Hidden Dividend Stocks Plus, except where otherwise noted.