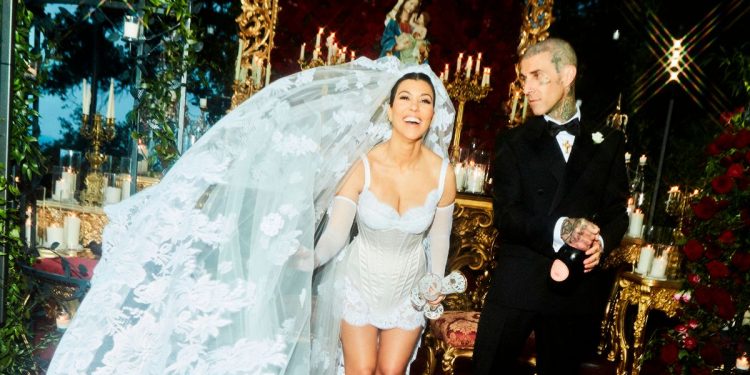 Kourtney Kardashian and Travis Barker get married in Italy

Kourtney Kardashian has taken the plunge and changed her iconic last name after marrying Travis Barker in a lavish Italian wedding.

The 43-year-old newlywed has unveiled her new name and confirmed she’s taken her husband’s surname in a modern twist following their fairy-tale wedding on Sunday.

The reality TV star will now go by Kourtney Kardashian Barker, according to the star’s newly updated Instagram account.

Kourtney’s new name echoes that of her sister Kim, who also decided to forego a double-barrel or taking her ex-husband’s name and opt for two last names instead when she married Kanye West.

The mum-of-three married long-term friend and Blink-182 drummer Travis for a third time in a lavish wedding ceremony in Portofino on Sunday evening.

The European wedding was the third time Kourtney and Travis have walked down the aisle in the last two months.

In April the pair shocked fans as they were pictured getting drunkenly hitched after partying at the 2022 Grammy Awards.

However, the boozy bride later admitted it was a prank after she and her beau had knocked back tequilas.

A month later, the smitten pair said their vows for real at a very different second wedding in Santa Barbara.

The couple married for real in a low-key affair at a local courthouse with none of Kourtney’s famous family or her three children in attendance.

Only Kourtney’s grandmother MJ and Travis’ dad Randy were invited, with the pair acting as their witnesses.

Kim Kardashian and her daughter North joined the wedding party
(

For her big day, Keeping up With The Kardashians star Kourt wore a stunning Dolce and Gabbana lace minidress along with a white cathedral veil which featured an embroidery of the Virgin Mary with her hands placed together in prayer.

The entire Kardashian-Jenner and Barker clan celebrated alongside the lovebirds as they were all seen living it up in the picturesque Italian seaside town ahead of the ceremony.

Kourtney delighted fans when she posted a series of snaps on Instagram after their romantic wedding ceremony, where she gushed about her future with Travis.

The reality star proudly proclaimed ‘happily ever after’ in a sweet snap which saw her kissing Travis at the altar after the pair exchanged vows.

The pair first unveiled their romance on Valentines Day 2021.