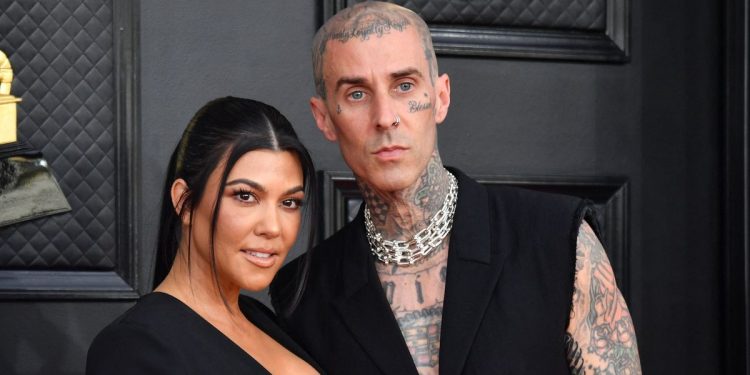 Kourtney Kardashian and Travis Barker are married, it’s been claimed.

TMZ reports that the couple tied the knot in Las Vegas after attending the Grammys together.

It’s claimed the Keeping Up With The Kardashians star, 42, and Blink-182 drummer, 46, headed to a chapel after 1.30am on Monday and took full advantage of being in Vegas for the awards bash by tying the knot.

Sources say Kourt and Travis said ‘I do’ just hours after he performed live at the music awards, and that they didn’t allow the venue to take any photos of them, taking along their own photographer and security instead.

Kourtney and Travis at the Grammys
(

They put on their regular PDA
(

Getty Images for The Recording A)

The insider says they arrived with their marriage license and handed it over to the chapel’s owner, who acted as a witness for them.

It’s also said that they had an Elvis impersonator perform the ceremony, and it was important to them that someone dressed as the King of Rock ‘n’ Roll was the one to pronounce them man and wife.

Fans shouldn’t be disappointed though, because it’s said the Vegas ceremony won’t be the only one to mark Travis and Kourtney’s commitment to one another and that “several” others will take place.

The pair got engaged in October
(

Kourtney and Travis got engaged in October last year when he got down on one knee for a romantic beach proposal.

While the pair have been friends and neighbours for years, they developed a romance and went public with their relationship in January last year, and they’ve been well known for their very public displays of affection ever since.

Announcing the engagement on Instagram, Kourtney wrote “forever” as she shared beautiful pictures from the moment he got down on one knee.

Travis is – or will be if the reports aren’t correct – Kourtney’s first husband.

She had a 10-year romance with Scott Disick and they share children Penelope, Mason and Reign together.

They were friends for years before romance blossomed
(

He shares kids Landon and Alabama with Shanna.