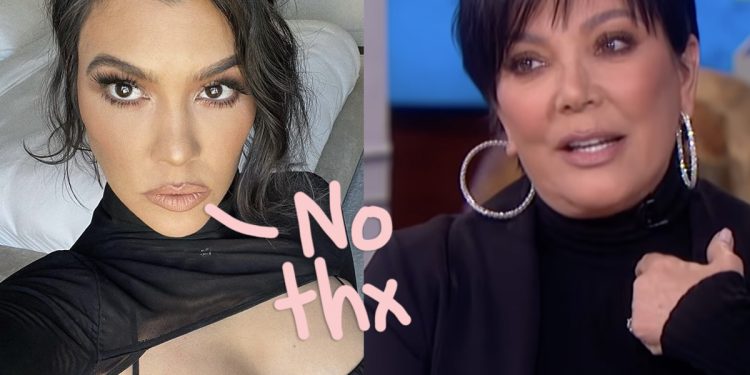 
Kris Jenner is always thinking about the family business!

But does that mean Kourtney Kardashian should have to take the same perspective on her love life?!

The momager and her oldest daughter are reportedly at odds right now, facing down an alleged disagreement over a business decision being made (or, not being made…) in the wake of Kourt’s surprise ‘no license’ Las Vegas wedding to Travis Barker earlier this week.

Related: Kourtney And Travis’ Vegas Wedding Vows Have Been Revealed!

According to a source spilling to The Sun, the 42-year-old Poosh founder is balking at Kris’ apparent request to incorporate her Las Vegas nuptials into the fam’s new Hulu show, The Kardashians.

As we’ve been reporting, Kourtney surprised everyone by tying the knot with the 46-year-old drummer early on Monday morning, about six months after the duo first got engaged on a SoCal beach. Or… maybe they didn’t actually tie the knot? Legally? Either way, they definitely had a real ceremony at One Love Wedding Chapel in Las Vegas!

Whether or not Kravis’ marriage is legally binding at this point, the matriarch-slash-momager wants kontent for the KarJenner fam’s new show! While the happy couple did have some friends at the Sin City chapel to take pics and video, they made a point not to have Hulu crews come along for the ride. That apparently doesn’t sit well with Kris, because she REALLY wants the footage to grace streaming screens in this newest season of the fam’s reality TV venture!

The insider explained as much to the outlet, saying (below):

“Kris is now pushing Kourtney to feature the Vegas wedding on the show. She’s saying that it’s what Kourt signed up for when she agreed to appear on the new show.”

We know all about Kourt’s long history of being hesitant to commit to filming for her family’s reality TV empire.

She’s just never been quite as into it as sisters Kim and Khloé. Heck, Kourtney called the environment “toxic” in a memorable interview released a little more than a month ago! And apparently right now, that means it’s time for some serious friction between Kourt and her business-focused momma.

“Kourt did have a photographer there but at the same time, the Vegas wedding was just for her and Travis. It’s really tense but Kourt doesn’t want to engage right now.”

That’s not good at all. It remains to be seen what’ll happen.

Of course, with the first season of the fam’s Hulu venture set to be released next Thursday, they’ve already got a whole line of episodes filmed and ready to go. To that end, it’s not like Kris needs this ASAP. And as we’ve been reporting, Kourt and Travis’ fertility journey is set to be a MAJOR storyline in that series of new installments.

Still, Corey Gamble‘s better half sure knows how to turn on the charm — and how to apply pressure when needed. So it’ll be interesting to see how this little disagreement resolves itself moving forward.

What do U think, Perezcious readers? Does Kris have a point here about wanting to make Kourt’s love life visible to the public? This is what the family does, after all…

Or does Kourtney deserve some level of privacy, even aside from her participation in the family business?!