Kourtney Kardashian is finally getting her moment for sister Kim’s SKIMS line after joking she was left out of the ‘sister shoot’ on Valentine’s Day.

On Wednesday the 41-year-old Poosh founder brought her glam to the ‘gram as she shared a sparkly selfie from the top secret shoot.

She flashed a hint of cleavage and a radiant face that featured magenta eyeshadow, adding some flare to the photo with a sparkly filter. 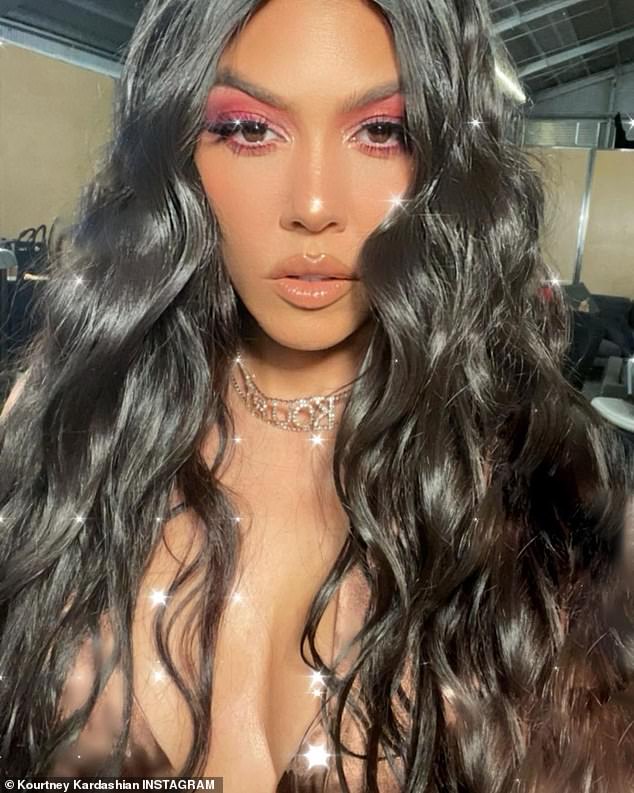 Her moment: Kourtney Kardashian, 41,  gets her moment for sister Kim Kardashian’s SKIMS line as she posts a sparkly selfie ahead of the top secret shoot

Though Kourtney remained mum on the project, her glam team could not contain their excitement as her hairdresser Glen Coco wrote ‘@kourtneykardash x @skims COMING SOON!’

She appeared in a plunging brown silky top and a choker with her name on it, showcasing sultry brown tresses and a peachy lip.

Earlier in the day she posted a photo from the makeup chair, simply writing ‘good morning boys and girls,’ though a paper pasted on the mirror read ‘SKIMS.’

Last week, Kourtney shared a photo of herself in a red SKIMS set as she made her own photoshoot writing ‘Since I wasn’t invited to the sister shoot…’ 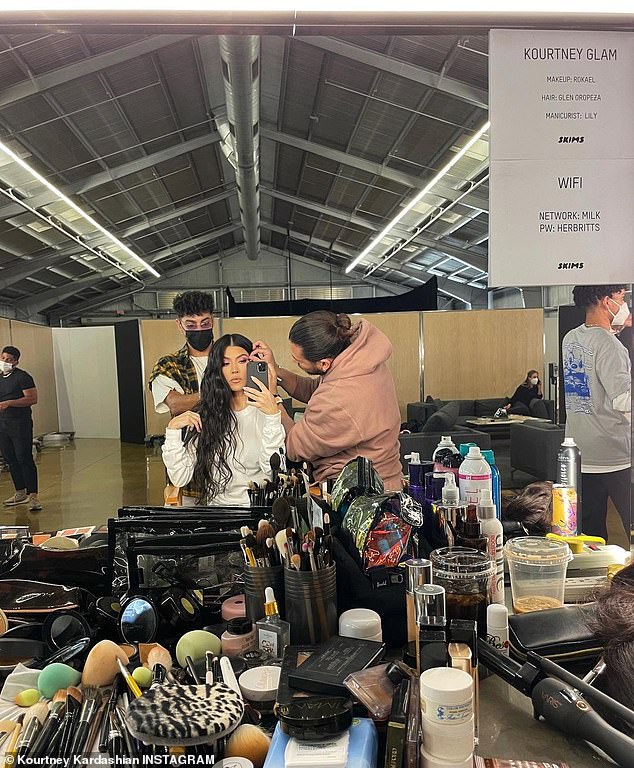 Secret revealed: Though Kourtney remained mum on the shoot the paper posted on the mirror gave it away, in addition to her hairdresser posting ‘@kourtneykardash x @skims COMING SOON!’

She playfully jabbed at Kim, and half-sisters Kendall and Kylie Jenner, who made sizzling appearances for the shapewear line to promote a new sexy lingerie collection.

Despite not being involved, some fans worked their magic as they photoshopped her into the images, though others joked that she deserved a solo shoot anyways.

Upon sharing the new images ahead of the project one fan asked, ‘What’s the skims photoshoot for?,’ to which she responded ‘for my solo billboard.’

Despite not being the leading lady in her sisters’ minds, she has become number one in beau Travis Barker’s life. 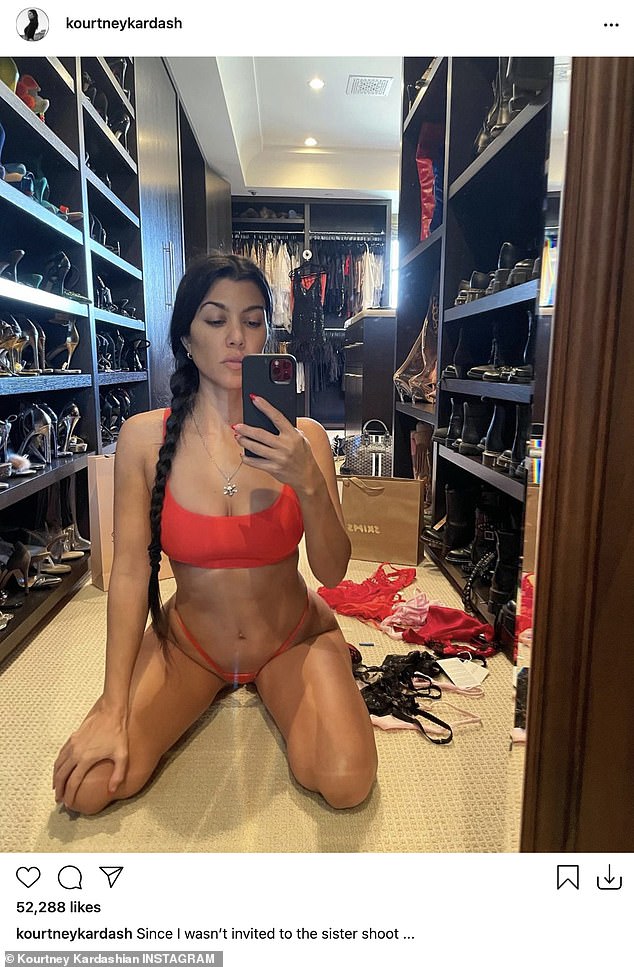 Solo shoot: She had jokingly taken issue with not being invited to shoot Kim’s sexy lingerie collection along with Kendall and Kylie as she made her own fun on Instagram 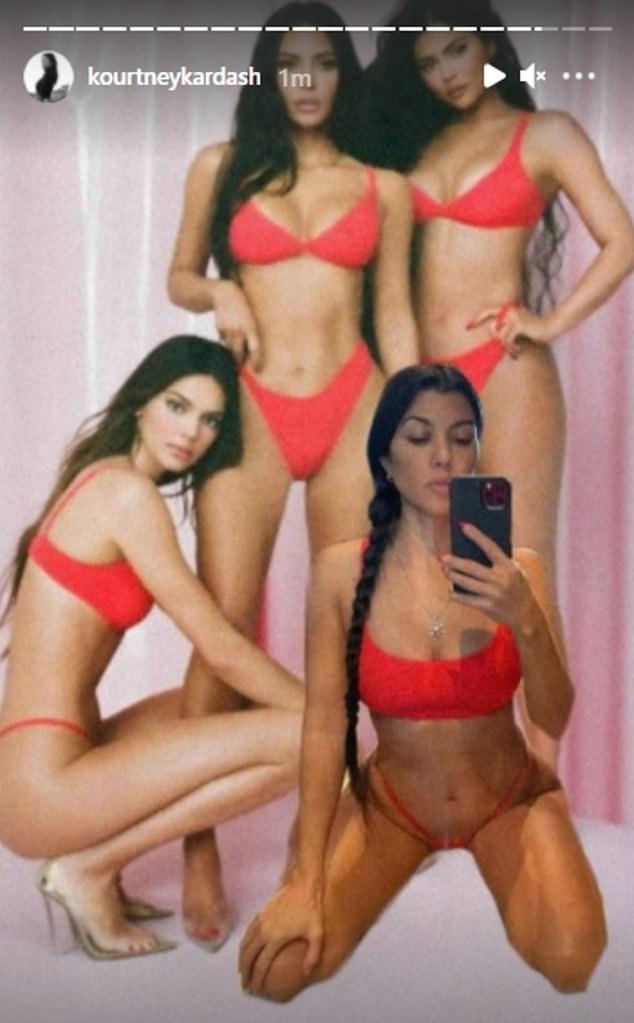 Much better! Her loyal fans took creative liberties to photoshop her into the images

The pair who were rumored to be involved for months made their relationship Instagram official just after Valentine’s Day as she posted a photo of them holding hands.

The Blink-182 drummer and Kourtney had been flirting on social media for months and posted similar Instagram stories, causing fans to connect the dots, before they eventually stepped out on a romantic date at Matsuhisa.

Now with the relationship out in the open they have continued to share intimate glimpses into their life on Instagram.

Last weekend Barker shared a love note she had written him that read, ‘To lots of fun adventures, may we destroy each other completely. Love, Kourtney.’ 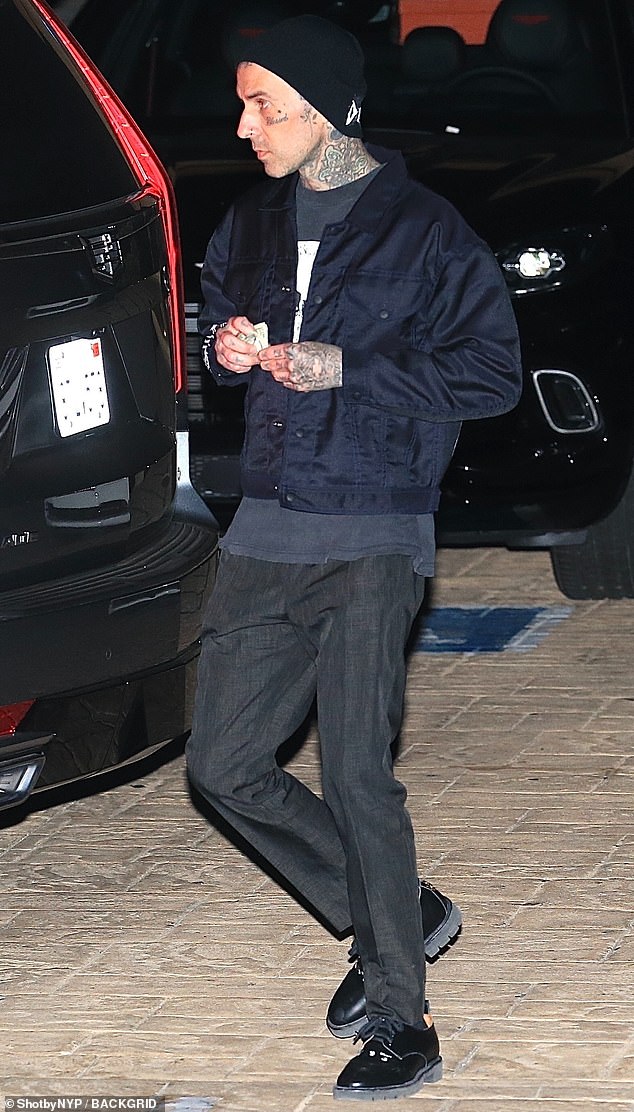 Friends and lovers: The longtime friends became romantic in recent months and are close with each other’s families, though he stepped out solo last weekend as Kourtney tended to sister Kim amid her divorce; pictured February 21 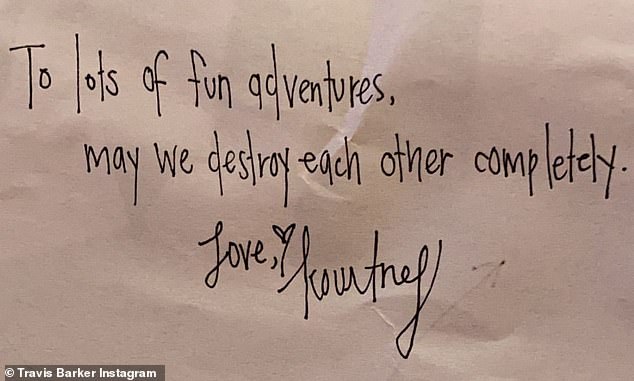 Love letters: Last weekend Barker shared a love note she had written him that read, ‘To lots of fun adventures, may we destroy each other completely. Love, Kourtney’ 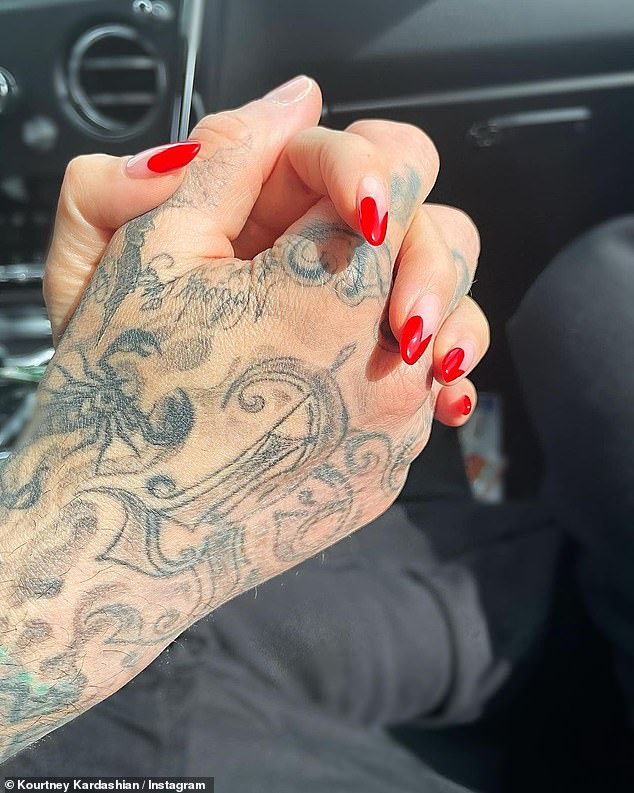 New romance: The pair confirmed their relationship following months of speculation with a hand-holding selfie and have continued to flirt on social media

Though her love life is finally booming since splitting from model Younes Bendjima in 2018 following two years of dating, her sister Kim’s is now legally over.

Kim filed for divorce officially last Friday following seven years of marriage to Kanye West, and her close knit family stepped in to be by her side.

They all enjoyed a weekend getaway to mom Kris Jenner’s palatial Palm Springs house with their kids as Kim seemed to be in good spirits despite the dissolution of their marriage.

She posted to social media as she shared a video of her and friends writing, ‘I’m so happy.’ 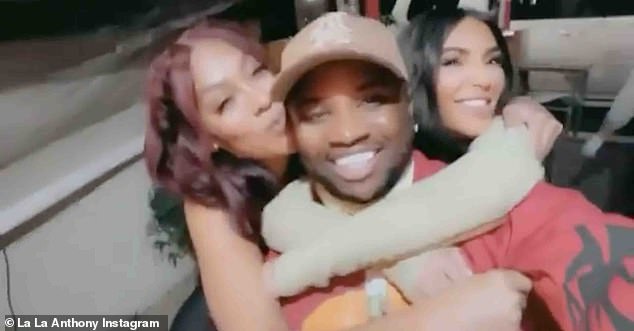 Support: The SKIMS founder put on a happy face to celebrate Cheban’s birthday alongside Kourtney and Lala as she wrote ‘I’m so happy’