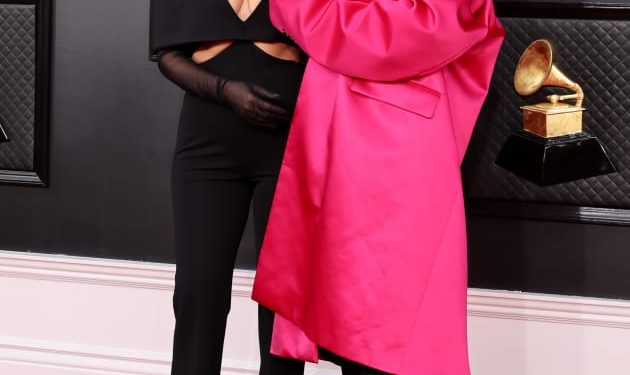 Kourtney Kardashian and Travis Barker flew into Las Vegas for the 2022 Grammy Awards on Sunday night.


And it seems that the couple decided to participate in a different sort of ceremony before leaving Sin City.


Yes, according to a new report from TMZ, Kourtney and Travis got married in the wee hours of Monday morning.


Basically, it sounds like the couple left the Grammys and walked straight into the nearest chapel where they exchanged vows in front of a minister who was dressed like Elvis (of course).


Sources tell TMZ that the Elvis component was important to Kourtney and Travis, which makes sense.


After all, the couple has been open about their shared obsession with the 1993 Tony Scott film True Romance, in which the character played by Christian Slater receives counsel from an apparition of the King.


The site reports that this will almost certainly not be Kourtney and Travis’ only wedding, and their subequent ceremonies will go a more traditional route.


It’s the first marriage for Kourtney, who never tied the knot with Scott Disick despite a decade-long relationship that yielded three kids.


This is Travis’ third marriage.


He wedded Melissa Kennedy back in 2002, but the couple went their separate ways just nine months later.


Two years after that, Travis married to Shanna Moakler, and that relationship lasted only slightly longer.


Barker filed for divorce in 2006 after less than two years of marriage — but not before he and Shanna created two children and a short-lived MTV reality show together!


Shanna claims the marriage came to an end after she caught Travis cheating on her with Kim Kardashian, but Barker insists the allegation is untrue.


Travis proposed to Kourtney in October after just eight months of dating.


This relationship has been moving quickly since the very beginning, but those who know Travis and Kourtney best say they weren’t surprised.


Both reputations for being true romantics (in keeping with the theme of their favorite movie!), and they enjoyed a fun, flirty friendship for several years before they officially started dating.


It’s unclear which family members and friends were present for the wedding, which reportedly took place around 1:30 in the morning.


But those were not in attendance can take comfort in the knowledge that Travis and Kourtney are reportedly planning “several” additional ceremonies, with “lots of fanfare.”


The couple has spoken openly about their desire to start a family together, and many fans are convinced that the quickie wedding is a sign that Kourtney is secretly pregnant.


We suppose that’s a possibility — but it’s just as likely that she and Barker simply decided to quietly make their relationship official during their time in the quickie wedding capital of the world.


The Kardashians new Hulu series is set to debut next week, and while Travis and Kourtney’s whirlwind romance and engagement will be heavily featured, it sounds as though no cameras were present for the wedding.


We suppose even the Kards like to keep some things private.


Anyway, our sincerest congrats go out to Travis and Kourtney!


We look forward to the remaining weddings!