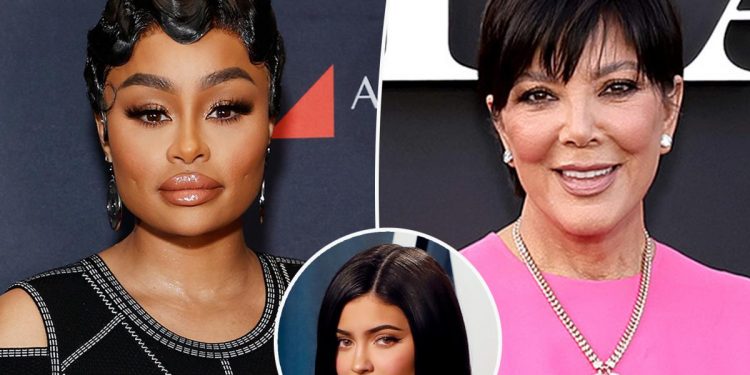 While on the stand in Los Angeles on Thursday, the momager testified that she was “alarmed” years ago when Kylie and then-boyfriend Tyga told her about the alleged threat.

Kris added that Tyga told her on multiple occasions that Chyna allegedly tried to physically harm him with a knife.

“Of course it was alarming but we just kept it in the family,” Kris testified, telling the jury that they did not report the alleged incident to police.

“They lived across the street and she [Chyna] had a young child. I think we were more concerned about the Tyga situation.”

During her testimony on Wednesday, Chyna claimed she was still in a relationship with Tyga when Kylie started dating him in 2014.

Kris was later asked by Chyna’s attorney, Lynne Ciani, whether she was concerned about Rob entering a relationship with the same woman who allegedly threatened Kylie.

”I didn’t have much of a reaction,” Kris said. “There was just a lot of drama … and I’m used to that in my family.”

Khloé Kardashian, who was seated next to sister Kim Kardashian in the courtroom, smiled at her mom’s matter-of-fact response.

“It happened so fast, and we didn’t know where their [Rob and Chyna’s] relationship was going to go,” Kris continued. “It wasn’t that I was not concerned. They had a rocky relationship from the start … but I love second chances and I wanted them to win.”

She added, “I just wanted my son to be happy. I wanted a win for them. … You hope for the best and move on.”

Chyna is suing Kris, Kim, Khloé and Kylie for $40 million for loss of earnings and more than $60 million in future earnings. She claims the famous family used their power to tarnish her reputation and prevent financial opportunities after they allegedly “conspired” to cancel the second season of “Rob & Chyna” – which they’ve rebutted.

Ciani asked Kris on Thursday whether she could recall having a conversation with a network executive about not being happy with Rob and Chyna’s relationship.

She admitted she might’ve said that “depending on the day,” noting that there “were a lot of ups and downs” in the relationship.

“But I really wanted Chyna to grow and be the best version of herself,” she claimed.

Kris testified that she negotiated a deal that garnered $200,000 for a seventh episode of “Rob & Chyna,” which was aired with footage she shot of Dream’s birth at the hospital.

“I put that in a bank account for Dream,” the momager said with a huge smile. “It’s in a trust, earning interest.”