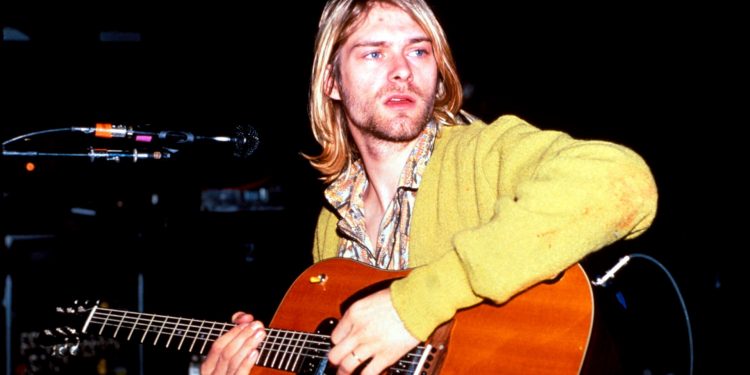 
Kurt Cobain passed away 28 years ago on 5 April 1994. On the anniversary of his death fans are remembering the incredible life and music of the Nirvana frontman. We take a closer look at his final words and the events surrounding his death.

Kurt Cobain died at the age of 27 years old. He was married to fellow singer Courtney Love at the time of his death.

The pair have one child together, Frances Bean Cobain, who is now 29 years old.

How did Kurt Cobain die?

Kurt Cobain took his own life at the age of 27. He ended his life with a shotgun at his home in Seattle on 5 April 1994.

His body was found three days later by Gary Smith, an electrician who was installing a security system in his house.

Cobain had previously been left in a coma in Italy a month prior after taking a cocktail of champagne and the drug Rohypnol. The Nirvana singer had also previously threatened to kill himself, with the police being called to his house and confiscating four guns that were on the premises.

Before taking his own life Cobain had taken large quantities of Valium and heroin. He left a single suicide note.

What were Kurt Cobain’s final words?

The final few lines of Kurt Cobain’s suicide note are addressed to his wife Courtney Love and his daughter, Frances. He writes:

“Frances and Courtney, I’ll be at your alter.
Please keep going Courtney, for Frances.
For her life, which will be so much happier without me.

These words show how much the singer loved his family, but also how much he was suffering with negative thoughts, and his deteriorating mental state.

Cobain also includes a reference to the Neil Young song My My, Hey Hey. (Out Of The Blue), writing: “It’s better to burn out than to fade away.”

He also calls for “Peace, love, empathy” before he signs his name at the bottom of the note.

Kurt Cobain was also interviewed by rock journalist Claude Balzac for Madhouse magazine just hours before he took his own life. In the interview the pair discuss his family, his relationship with the other Nirvana band members, and how he enjoys the “small things in life”.

The final words of the interview were: “Well, see you around – Keep on Madhousing and remember, it’s better to fade away than to burn out – Live Long and prosper!”.

While the final comment is a clear Star Trek reference, it appears that Cobain misquotes the same Neil Young lyric that he later writes in his suicide note. However, this could just be an error from the transcription of the interview.

Despite Kurt Cobain passing away nearly 30 years ago, Nirvana remain one of the most popular bands of all time.

The band’s most famous album, Nevermind, was released on 24 September 1991. It was their second album, following the less successful Bleach, which was released in 1989.

The album has now sold more than 30 million copies worldwide, and has been recognised as one of the greatest albums of all time.

Nirvana’s most popular song, Smell’s Like Teen Spirit, has over 1 billion streams on Spotify.

The grunge classic Something In The Way was also recently used in Matt Reeves’ film The Batman to stunning effect.

In other news, BTS ARMY left screaming after V is ‘smooth like butter’ with Olivia Rodrigo