Kenosha shooter Kyle Rittenhouse’s lawyers say the teen has not vanished and has instead been moved to a secret ‘safe house’ ahead of his murder trial after receiving death threats – but they’re refusing to disclose where.

Rittenhouse’s legal team, led by Mark Richards, made the claims in response to Wisconsin prosecutors requesting an increase in bond and new arrest warrant for the 18-year-old, alleging he broke the conditions of his $2 million bail.

The teen, who is charged with shooting dead two protesters in Kenosha, Wisconsin, last August, has been accused of moving addresses without notifying the court as required under his terms of release.

Rittenhouse’s failure to disclose his whereabouts has reportedly inhibited law enforcement’s ability to monitor him, according to court papers filed by the Kenosha County District Attorney’s Office on Wednesday.

However, in a separate filing, Richards said his defense team knows Rittenhouse’s whereabouts, is in constant contact with him, and said the teen has been moved to a ‘safe house’ in response a succession of graphic death threats the teen received.

Richards also contended that he believes the defense should be able to keep the location of where the teen is staying a secret, in the interests of his safety.

The defense further claimed that a ‘high ranking’ member of the Kenosha Police Department also previously told them to deliberately list a false address for where Rittenhouse was staying on court papers in order to protect him. 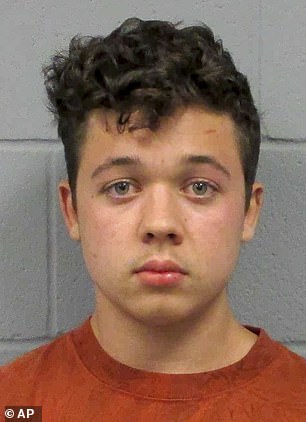 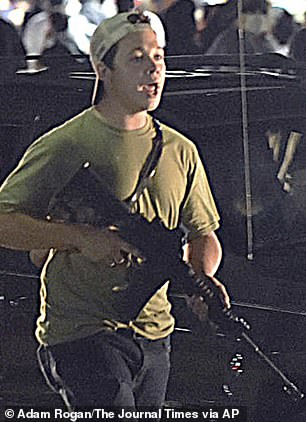 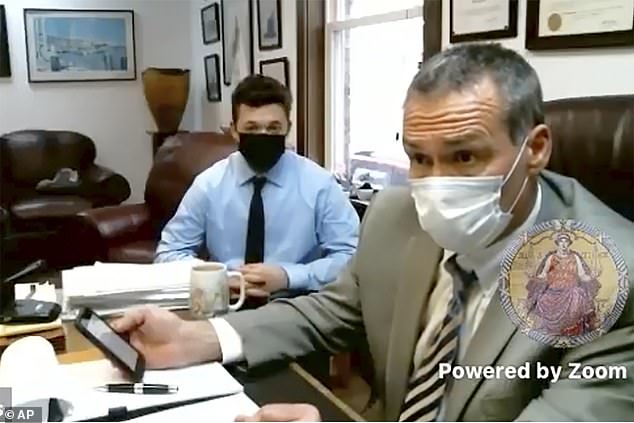 Rittenhouse’s legal team, led by attorney Mark Richards (shown right with Rittenhouse), said they are aware of the teen’s location but said they should be permitted to kept it secret

Rittenhouse was released on $2 million cash bail back in November, following a fundraising campaign from right-wing activists and conservative celebrities.

Officials reportedly became aware of his change of address on January 28, after a mailed notice to his home in Antioch, Illinois was returned to sender without a forwarding address.

After visiting the listed address, Kenosha authorities discovered that another man had been living at the home since mid-December.

On Wednesday, court documents filed with Judge Bruce Shroeder disclosed that prosecutors are essentially unable to find Rittenhouse, despite his bond motion specifically requiring him to ‘give written notice’ to the court if his address was to change.

As a result, the Kenosha District Attorney’s Office requested a $200,000 increase on Rittenhouse’s bond, and asked for a fresh arrest warrant to be issued for the teenager.

‘In a criminal case as serious as this one, it is critically important that the court be able to monitor the defendant’s whereabouts at all times,’ the motion states. ‘After all, it is extremely unusual for a defendant facing a charge of first-degree intentional homicide in Kenosha County to post cash bond and be released from custody pending trial.

‘Rarely does our community see accused murderers roaming about freely.’

The motion also pointed to the GoFundMe effort that raised the sum to bail him out, adding he has little incentive to comply with his bail conditions because he didn’t foot the bill.

Prosecutors further blasted Rittenhouse for what they called his ‘carefree attitude’ after he was pictured drinking in a bar with members of the Proud Boys immediately after his arraignment on January 5. Pictured showed the teen flashing white supremacist signs and wearing a t-shirt reading ‘Free as F***’.

‘The defendant is free from custody with minimal incentive to comply with his bond conditions,’ the motion states. ‘He posted no money, so he has no financial stake in the bond. He is already facing the most serious possible criminal charges and life in prison, so in comparison, potential future criminal penalties are insignificant.’ 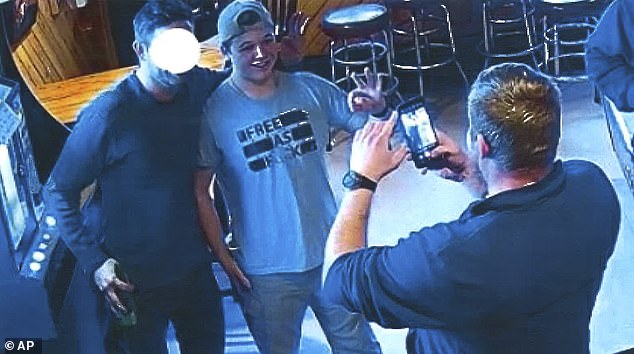 Rittenhouse, center, has been slammed for his ‘carefree attitude’ after he was pictured drinking after his release from jail 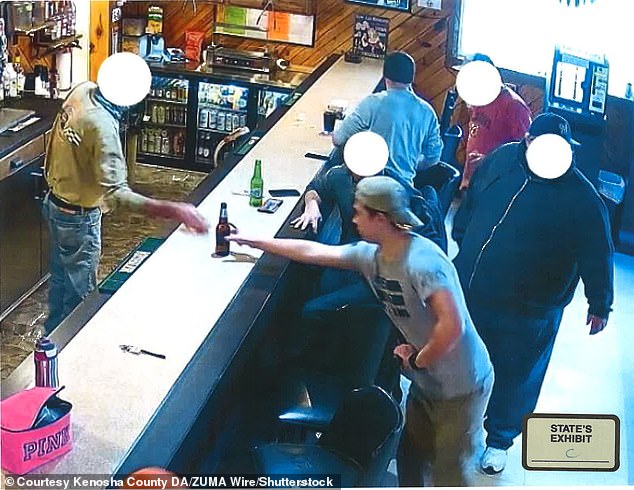 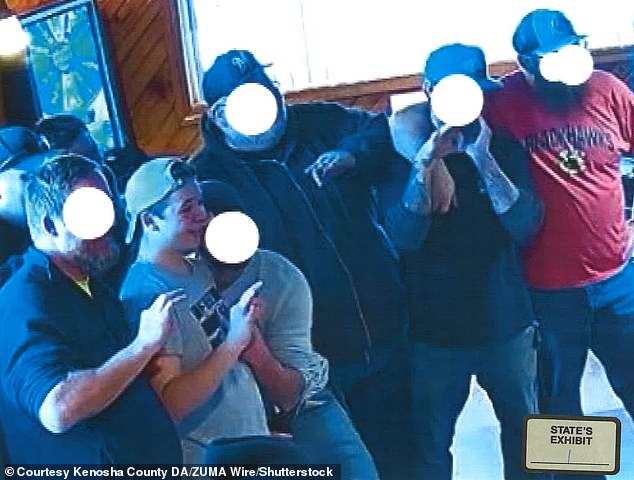 In response, Rittenhouse’s attorney, Mark Richards, argued in his own motion that police previously advised the defense to deliberately list the wrong address to protect his client who had been receiving death threats.

Richards provided Law & Crime with court filings which oppose the state’s motion to increase the bond amount, along with an example of a graphic and sexually-explicit death threat Rittenhouse was sent last month.

The filings state: ‘John Pierce [Rittenhouse’s former attorney] was directly informed by a high-ranking member of the Kenosha Police Department not to provide the address of the Rittenhouse Safe House because of the numerous threats made against Kyle and his family.’

Pierce’s affidavit states: ‘Due to threats made against Kyle, I was concerned for his immediate safety while transitioning out of police custody after his bond was posted. Because of these concerns, I coordinated Kyle’s release with Captain Bill Beth of Kenosha County Sheriff’s Office several days prior to actually posting his bond.

‘After arriving at the Public Safety building, I reported to Joint Services and tendered the personal bond amount for Kyle. I was instructed to fill out a form and provide Kyle’s personal information, including his address and social security number.

‘While I was completing this form, I was approached by a Kenosha Police Department Captain, who offered his assistance.

His defense team says they reached out to prosecutors in November to discuss providing the court with Kyle’s new address, but the assistant district attorney would not allowed it to be filed under seal.

‘It is noteworthy that the State has only now decided to file a motion to increase bond in this case, despite having corresponded with [the defense] regarding the change in Kyle’s residence over two months ago,’ Richards wrote. 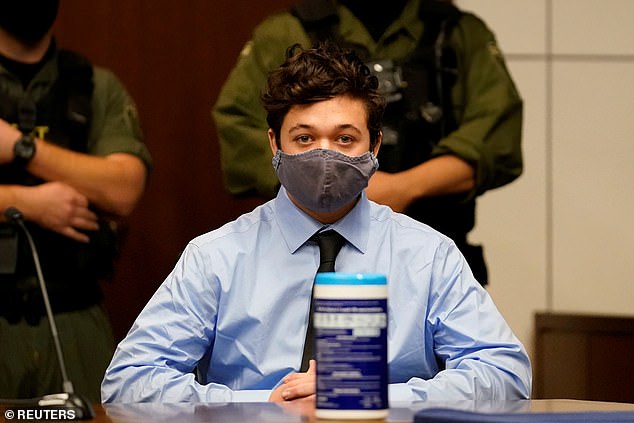 The Kenosha District Attorney’s Office requested a $200,000 increase on Rittenhouse’s bond, and asked for a fresh arrest warrant to be issued for the teenager 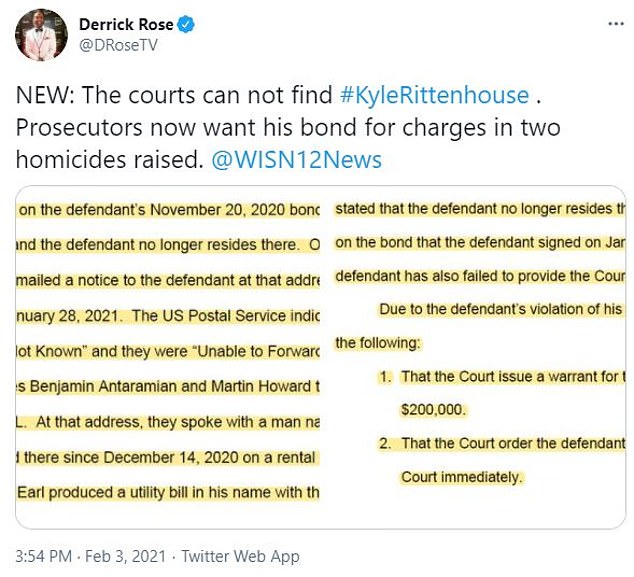 WISN obtained the filing, pictured, which shows mail sent to Rittenhouse was returned 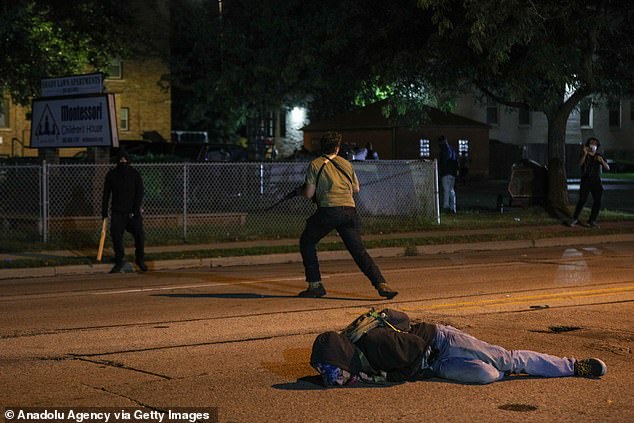 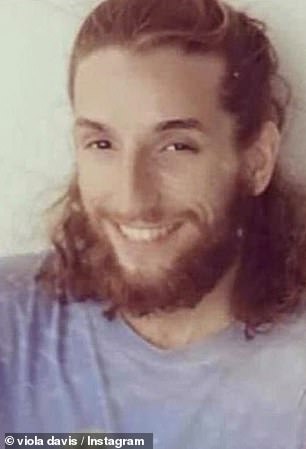 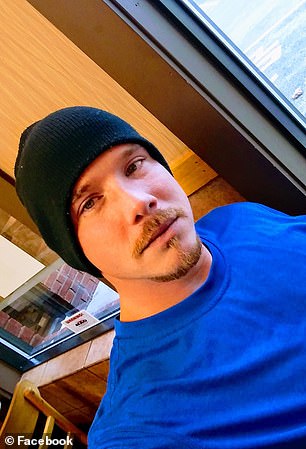 Rittenhouse is accused of fatally shooting Joseph Rosenbaum (right) and Anthony Huber (left) during a demonstration August 25. He is also accused of shooting a third man in the arm, who survived

Rittenhouse is accused of fatally shooting Joseph Rosenbaum and Anthony Huber and wounding Gaige Grosskreutz during a demonstration August 25 that followed the police shooting of Jacob Blake in Kenosha.

Former NYPD Blue actor Ricky Schroeder and My Pillow CEO Mike Lindell helped stump up the cash to free him along with other supporters.

Attorney Lin Wood shared a photo of Rittenhouse alongside Schroeder just hours after he was free and captioned it ‘FREE AT LAST!!!’

Before the lawyer’s account was banned by Twitter, he also tweeted: ‘Just off phone with Kyle. With tears in my eyes, I listened as he expressed thanks to The People for your prayers, donations & support. He prayed every day & night & said God lifted him up every time he fell. Kyle is a hero. So are his supporters. Keep him in your prayers.’

Rittenhouse told police he was attacked while he was guarding a business and that he fired in self-defense.

He faces multiple charges, including intentional homicide, reckless endangerment and being a minor in possession of a firearm. Wisconsin law doesn’t permit minors to carry or possess a gun unless they’re hunting.

Rittenhouse pleaded not guilty to seven charges in January and his trial is slated to start on March 29.

We are entering the era of e-globalisation

Mater Dei RB Marceese Yetts gets ready for another adventure

Mater Dei RB Marceese Yetts gets ready for another adventure