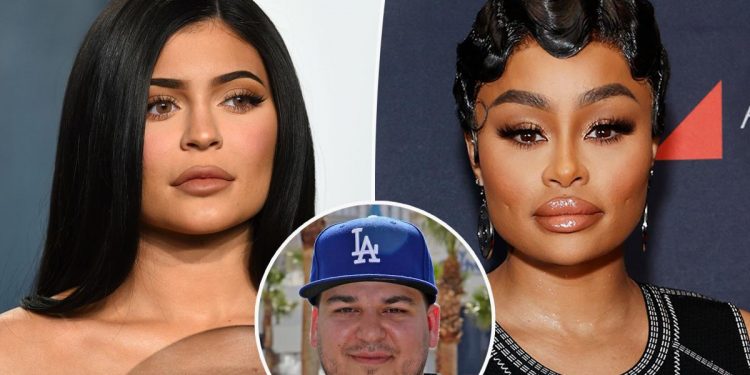 Kylie Jenner claims Blac Chyna tried to kill her brother, Rob Kardashian, and threatened her in text messages during her bombshell testimony.

The Kylie Cosmetics founder took the stand on Monday during the ongoing Kardashian-Chyna court battle, testifying that she remembers seeing her brother shortly after his blowout fight with Chyna in December 2016, where he alleged Chyna pulled a gun on him.

“He used the words, ‘She was trying to kill me,’” Jenner said at a Los Angeles courthouse. “I assumed that was a death struggle … I remember him being very upset and kind of explaining what happened.”

She said her brother told her that he was playing video games when Chyna went behind him and placed an iPhone cord around his neck.

Jenner — who previously dated Chyna’s ex Tyga — also testified she once remembers waking up to threatening texts from Chyna.

“She sent me a bunch of devil emojis and said, ‘counting down the days’ to beat me,” Jenner testified.

When asked by Chyna’s attorney, Lynne Ciani, why she did not report the threats to police, Jenner responded, “I took it as an empty threat.”

She added that Tyga told her Chyna had issues with drugs and alcohol and also told her about an incident when Chyna allegedly used a knife and sliced him on his arm.

“I assumed maybe she was high,” Jenner, dressed in a loose-fitting brown suit with large shoulder pads, said when asked again why she didn’t report the threatening texts to authorities.

During her testimony, Jenner admitted she was “a little upset when she learned on the Internet that her brother became engaged to Chyna.

“I was actually happy for my brother but at the same time, was curious how things would go with Chyna,” she said. “I actually wanted to be cool with Chyna. I actually spent a lot of time with her son. Despite everything, I wanted it to work out with my brother.”

When Ciani asked Jenner if she believed Chyna dated Rob “out of spite” because she began to date Tyga, Jenner said,” I was hoping no, for my brother.”

Jenner added she didn’t think Chyna truly loved her brother because of the physical threats that ensued during the former couple’s tumultuous relationship.

“I just don’t know how you could love someone and do that to them,” Jenner said, referring to the December 2016 altercation. “So I thought it was fake.”

Chyna — who shares son King Cairo, 9, with Tyga and daughter Dream, 5, with Kardashian — testified last week that she was “just joking” when she put the cord around Rob’s neck and pointed a gun “upward.”

Chyna is suing Kylie, sisters Kim and Khloé Kardashian and mom Kris for over $100 million in future loss wages because she alleges the famous family defamed her and conspired to kill her reality TV show, “Rob & Chyna” after the 2016 incident.

Chyna has also claimed she and Rob were not invited to a January 2017 meeting at Kris’ house where the family allegedly spoke to producers and network executives and about canning Season 2 of her show.

Emails revealed in court on Monday show that Kylie agreed to her own show that could replace “Rob & Chyna,” while Khloé wrote in an email that she was concerned about her brother and what Rob and Chyna’s toxic relationship could do to their “brand.”

Another email between Jeff Olde — a former executive vice president of development and programming at the E! Network who testified Monday as well — and his colleague read that the “entire family” was opposed to a second season of “Rob & Chyna.”

However, the rest of Olde’s email said he still hoped at that time that Rob and Chyna could get counseling, which could become a storyline within their main show, “Keeping Up With the Kardashians.”

The former E! Network executive said the family was on board with that idea. Olde added it was the best option he could come up with at the time since he would not “green light” Rob and Chyna’s show because it was no longer the “light-hearted” program he was initially pitched.

“They [the Kardashians-Jenners] weren’t trying to kill the show … they were trying to save it?” Kardashian lawyer Michael Rhodes asked Olde.